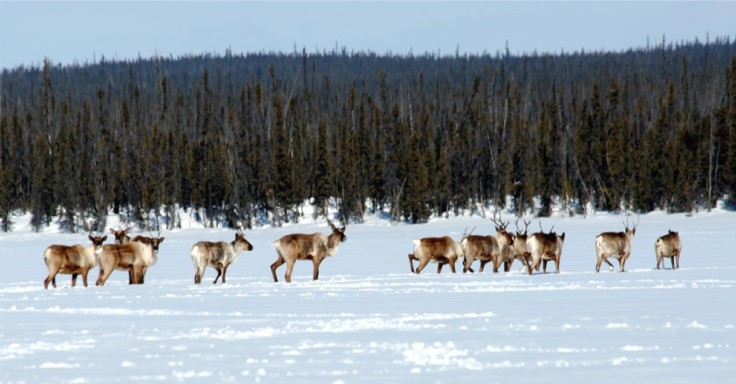 Posted at 13:51h in Cumulative Effects, Land Use, Nature and Biodiversity, Species at Risk by Jason Unger 1 Comment
0 Likes
Share

Within the past 7 days the federal and provincial governments published documents that may result in Alberta’s Woodland Caribou going down for the count.   These documents include the proposed federal Recovery Strategy for Woodland Caribou, Boreal population and the Draft Lower Athabasca Regional Plan (LARP).

So what do the Recovery Strategy and LARP do for Woodland Caribou?   As press releases from both the Pembina Institute and the Alberta Wilderness Association  point out, the documents do little to change how we approach managing caribou and their habitats in Alberta.   The most recent iteration of the LARP removes conservation areas previously identified by a regional advisory committee that would cover some caribou herds, and both the provincial and federal governments sidestep the issue of substantively dealing with habitat alteration. In terms of substantive actions that look to protect caribou today, the approach taken in the documents can be split into two categories: shoot wolves and plan to do something more sometime in the future (with lots of words like “coordination”, “knowledge”, “monitoring” and “education”).

The remainder of this blog is focused on the federal Recovery Strategy, as it has more legislative underpinnings than the LARP, which, while binding, has no specific substantive habitat conservation elements in its enabling legislation, the Alberta Land Stewardship Act.

The federal Recovery Strategy (under the Canada Species at Risk Act) falls short on several levels.

Each tier has its own recovery goal.  All herds in Alberta fall into the categories of NSS-Connect (in blue below) and NSS (in gray below).  The recovery goal for NSS-Connect herds is to become self-sustaining while the goal for NSS herds (the majority of Alberta herds) is to stabilize the local population.

(Not surprisingly, the conservation areas that did not make their way into the draft LARP are those NSS herds identified federally.)  The plight of the NSS herds is exacerbated by limiting the identification of critical habitat to allow disturbances of up to 95% of their habitat.

The problem with this approach is that it basically writes off the majority of Alberta herds and places an even higher risk of losing connectivity should the Red Earth and Richardson herds fail to recover.  Granted, I am not a caribou biologist, so the question that should be asked of one is:  “Is this approach not placing all your eggs in one basket?”

Second, the preamble to the federal Species at Risk Act indicates that a precautionary approach to species recovery will be taken.  The approach taken in the Recovery Strategy is anything but precautionary.  The Strategy sets a target of 65% undisturbed area of a caribou range as a threshold for management action and as a threshold for “critical habitat” for SS and NSS-Connect herds (in conjunction with biophysical attributes).  The probability of this disturbance level leading to a sustained herd population or positive growth is identified as 60%, meaning that there is a 40% chance that the level will not be self-sustaining (see Appendix E, Table A1 of the Recovery Strategy).  This, in turn, leads to an assessment of these targets in terms of the “Likelihood of Desired Outcome” as “as Likely as Not” and the “Level of Risk” as “moderate”.     (An interesting note here is that the North Interlake and William Lake herds in Manitoba and the Red Wine Mountain herd in Labrador all meet the habitat preservation threshold and are still not self-sustaining indicating that the threshold may be inadequate or that other factors are at the centre of these declines)

The combined effect of placing all the eggs in one basket and allowing for a significant likelihood that the strategy will not result in self-sustaining herds, places in question whether the strategy is serious about caribou preservation.

Finally, the strategy is very short on specific actions to be taken to actually reach the “as Likely as Not” scenario.  For instance, the Red Earth herd (a “connectivity” herd) has 44% anthropogenic disturbance according to the recovery strategy appendices, yet there are no concrete recommendations made to address this level of disturbance.  Indeed, without further federal action and without substantive protections being built into the LARP, it appears that Alberta’s Caribou will continue to be pummeled.

To summarize:  It appears that law makers have resigned themselves to the fact that the NSS herds are down for the count.  Meanwhile the NSS-Connect herds are still giving a fighting chance, but only if we can quickly teach them to become bipedal.

An overview of the Northern Gateway decision report
Grousing about the value of species or “how much for that caribou in the window?”
Optimistic policy is not what Woodland Caribou need
Lower Athabasca Regional Plan: Conservation areas mean something
Emergency order: Court wonders why some caribou herds need not survive