Whirling disease and the law: a call for precautionary environmental management on World Water Day

Home » The ELC Blog » Whirling disease and the law: a call for precautionary environmental management on World Water Day 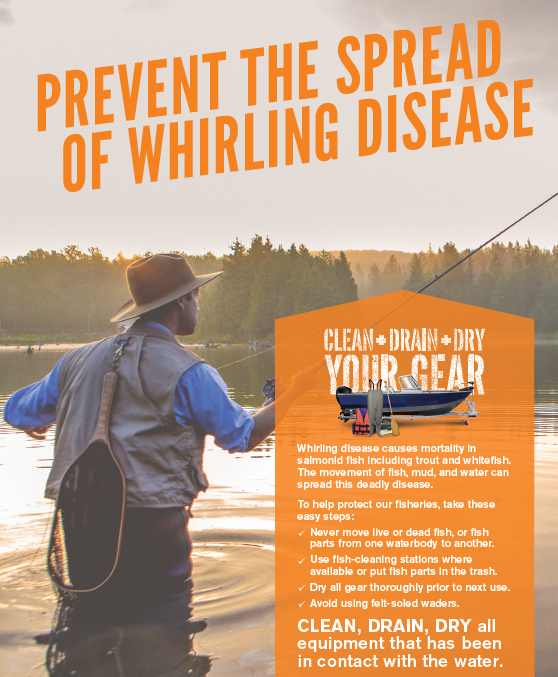 22 Mar Whirling disease and the law: a call for precautionary environmental management on World Water Day

Whirling disease and the law:

a call for precautionary environmental management on World Water Day

Invasive species are a huge challenge for our ever shrinking world.  Whirling disease being found in the Bow River brings this challenge into stark reality for Alberta.  This blog is sparked by a question I have as to whether we had our collective heads proverbial sediment about the disease and the overall health of our waterbodies.

Whirling disease arises from a microscopic parasite, Myxobolus cerebralis, which infects salmonids, including the various trout species which are the centerpiece of Alberta’s sport fishery.  Mortality on salmonid varies by species.  The parasite appears to have originated in Europe and has invaded North America to varying degrees.  Fish stocking programs and fish culture facilities were likely a cause of at least some of the spread of the parasite.

“Myxobolus cerebralis was detected in many fish culture facilities across the country between 1957 and 1990, but there were few reports of whirling disease in wild fisheries during this time (Yoder 1972; Hoffman 1990; Modin 1998; Bartholomew and Reno 2002).” Whirling Disease in the United States: A Summary of Progress in Research and Management in 2009

Unfortunately, economic and management drivers at play in hatcheries (resulting in inbreeding) may also result in lower fitness and heightened susceptibility among salmonids.

For Alberta’s part, awareness of Whirling disease has been long standing.  Montana and other nearby states have been dealing with Whirling disease for quite a while. Found in Pennsylvania in 1958, Colorado by 1987, Montana in 1994 and Alaska in 2006 according to Whirling Disease in the United States: A Summary of Progress in Research and Management in 2009. Alberta had a focus on whirling disease that appeared to drop off in the early 2000s. According to an Annual report for 2002-2003 the disease was one of the focus areas for the department of Sustainable Resource Development.  Also in the early 2000s reference to measures to stop its spread were referenced in two guides to the regulatory Codes of Practice under Alberta’s Water Act.

This all begs the question of what should reasonably be expected of hatcheries and regulators in terms of monitoring and testing for the disease.  Confounding the issue is that testing is not currently possible in Alberta, relying instead on other jurisdictions’ testing.

Fish culture facilities are governed under both provincial and federal laws.  Licences are required for keeping live cultured fish and operations.

The Federal Health of Animals Act requires the reporting of diseases once they are known to the nearest “veterinary inspector”.  Whirling disease is a reportable disease under the Reportable Disease Regulation of the Act.  While the Act does not create a duty to monitor or evaluate for diseases, it does note that “any fact indicating its presence” must be reported.

s.5 (1) A person who owns or has the possession, care or control of an animal shall notify the nearest veterinary inspector of the presence of a reportable disease or toxic substance, or any fact indicating its presence, in or around the animal, immediately after the person becomes aware of the presence or fact.

This provision doesn’t impose a duty of monitoring or inspection rather it establishes a reporting obligation where the disease or facts indicative of the disease become known.

Section 35 of the Fisheries Act is also applicable.

35 (1) No person shall carry on any work, undertaking or activity that results in serious harm to fish that are part of a commercial, recreational or Aboriginal fishery, or to fish that support such a fishery.

Serious harm to fish may be allowed where prescribed by regulation. We see just that in the Aquaculture Activities Regulation under the Fisheries Act. (Notwithstanding this regulation there would likely be several evidentiary challenges in a prosecution in any event, not the least of which is the chain of custody of the parasite laden fish and proving who was responsible for causing the serious harm)

(b) the following conditions are prescribed for the carrying on of those works, undertakings and activities:

(ii) the owner or operator of the facility takes reasonable measures to mitigate the risk of serious harm to fish outside the facility that are part of a commercial, recreational or Aboriginal fishery, having regard to

(A) the effectiveness of the available measures,

(B) the degree of serious harm that may result from the carrying on of the works, undertakings and activities, and

(C) the physical characteristics of the facility and the type of aquaculture that is engaged in at the facility, and

(iii) the owner or operator submits an annual report to the Minister in accordance with section 16.

What are reasonable measures in this context?

The condition of taking “reasonable measures to mitigate risk of serious harm to fish” in the Aquaculture Activities Regulation is open to interpretation (although it has several aspects in common to  a general due diligence defence to a s.35 prosecution).  Applying the Whirling disease situation to what will be considered reasonable mitigation measures several factors arise.:

Admittedly what appears reasonable to me may not be reasonable in the circumstances.  While I am quick to characterize the response to the whirling disease situation as “ostrich syndrome” there are some interesting issues that arise.

Certainly monitoring for indications of whirling disease should be seen as a reasonable step for what is a foreseeable problem.  Watersheds not far away from Alberta’s Bow River watershed have had whirling disease for decades and hatcheries have been known to be a problem vector for the disease for a similar time.   From a regulatory perspective this means having systems in place to ensure such monitoring is taking place and is effective.

Then there is the testing for the disease.  Alberta does not currently have the capacity to test for the disease.  If I were to mount an argument about reasonable steps this fact alone would strongly favour a more forgiving characterization of “reasonable”.

Then of course there is the cost of this monitoring and extra-jurisdictional testing.

In the end, it undoubtedly comes down to a cost-benefit analysis for both the regulator and for a given hatchery.  Where invasive species are involved the cost of regulation and taking reasonable care is far too easy to defer – until there is a problem.

Licenced private hatcheries should have clear testing requirements imposed as conditions on licences(if they are not there already).  Hatchery mitigation activities should be mandated to address all relevant life stages of the parasite including limitations on the nature of substrates used for containment – i.e. prohibitions on natural substrates which allow persistence of certain life stages.

Environmental regulation can often be criticized as being focused on responding to harm rather than preventing it.  Invasive species pose an interesting regulatory challenge insofar as it involves expending regulatory effort and money on ensuring nothing happens.  A more proactive and precautionary approach appears, unfortunately, to be anachronistic to how government creates spending priorities in terms of environmental outcomes (i.e. usually reactive).   This need not always be the case as exemplified by Alberta’s programs focused on monitoring, regulating and educating people about quagga and zebra mussels.

If we are to become more effective in our approach to protecting the environment rather than simply trying the fix the harm once it has happened we need to take the lesson of whirling disease to heart.  Whether it is invasive species or water and air quality we need to look to the possible future and not be solely focused on the challenges of today.  This means refocusing our efforts on prevention and precautionary environmental management and regulation.  It also means we need to constantly re-evaluate what “reasonable” steps we should take to protect the environment.

Habitat, what habitat? The Greater Sage-Grouse emergency order and a call for heightened due diligence [Revised]
Oil and gas well site reclamation, polluter pays and pie crust promises
Calmar: What lies beneath?
Canada’s proposed Fisheries Act regulations: do the feds want “out” of s.91(12) of the Constitution Act?
Core Environmental Principles for Environmental Laws, Policies and Legal Processes