Quads on Lake Shores: What are the rules and the state of enforcement?

Home » The ELC Blog » Quads on Lake Shores: What are the rules and the state of enforcement? 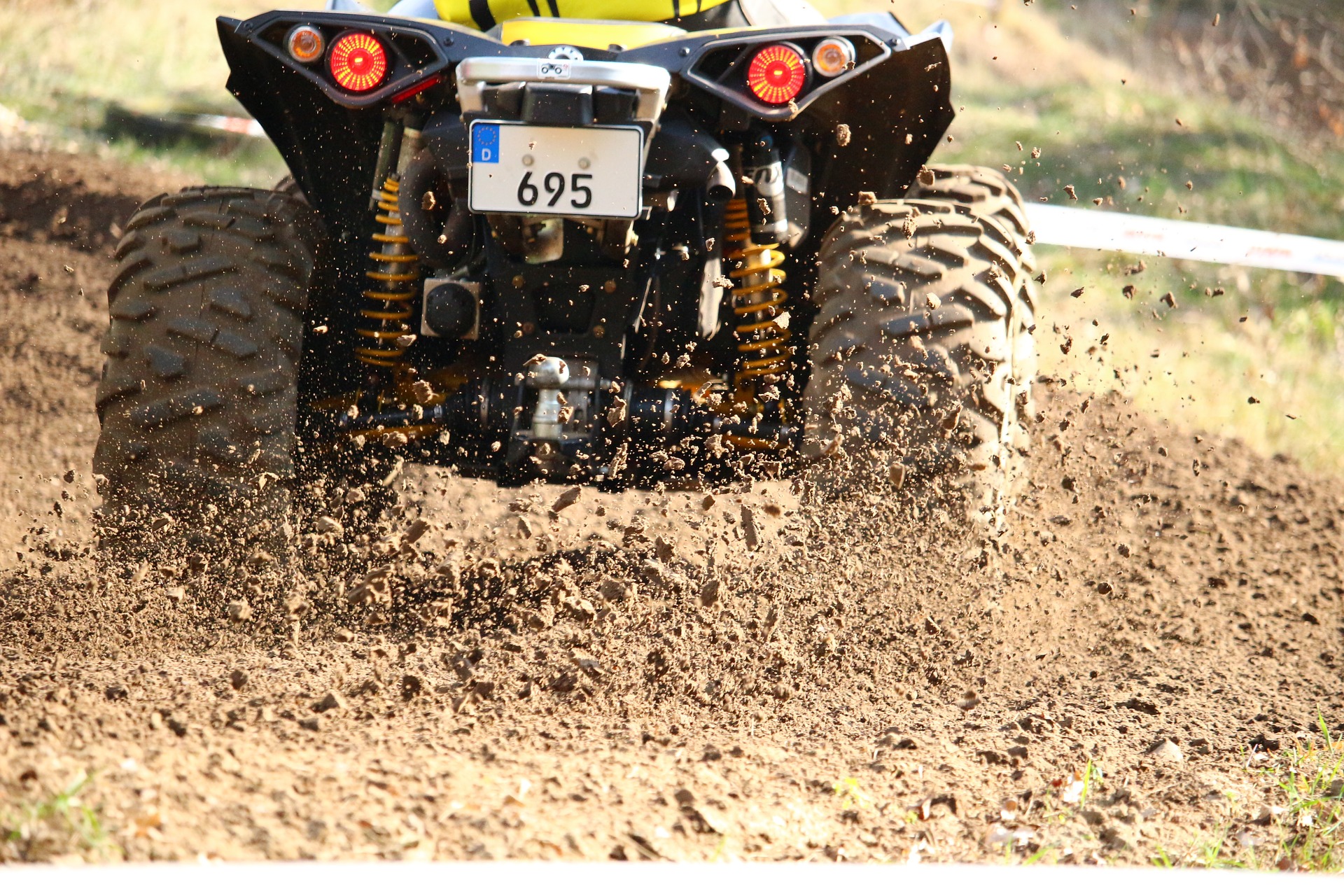 30 Apr Quads on Lake Shores: What are the rules and the state of enforcement?

Quads on Lake Shores: What are the rules and the state of enforcement?

The Alberta Lake Management Society has asked a good question.

It’s a timely one too, as awareness about the impacts of OHVs on watersheds peaks with the annual spring wetness.  There are definitely rules and some options for better enforcement.  There’s also a slight legal grey area and passing of the hot potato.  Wet areas surrounding a permanent lake expose a gap in provincial regulations and uncertainty as to how municipalities can fill it.  Some simple reforms would provide much clarity and there are multiple current opportunities.

Whose job is it anyway?

The environment isn’t a distinct legal category. That means everyone including the feds, the province, the municipality and the landowners could have lake management roles. The two key players concerning quads on lake shores are the province and the municipalities, and I sense uncertainty about their division of responsibility.  Lakefront landowners and the feds have smaller roles that I’ll note in passing:

Lakefront landowners might have most reason to complain about OHVs but they may discover that public policy is a more useful tool than property rights. Direct recourse would require a private lawsuit against the individual quadders. These individuals might be unidentifiable and are often less of a problem than the cumulative effect of motorized access. The claim would be based on common law nuisance or riparian rights. Riparian rights aren’t available where the property is separated from the water by strips of municipal or provincial land. Even a non-navigable marsh between the land and open water could stymie a claim. Therefore good lake management measures by public authorities have the side effect of foreclosing private claims.  The benefit is that private claims become less necessary. We’ll revisit the landowners respecting municipal planning.

Federal legislation is mostly help not hurt, just don’t expect much help. The Migratory Birds Convention Act, Fisheries Act and Species at Risk Act can all regulate recreational impacts. The best example was a Fisheries Act conviction for “joyriding” in Waiparous Creek in the Ghost on the 2011 May long weekend [the Bertram case]. The future utility of federal legislation is uncertain in this age of rollbacks.

Beware that the federal power over navigation can impair local action against motorized watersports. This barrier can be avoided by distinguishing OHVs in the water from motorized boating. In R v. Kupchanko the British Columbia Court of Appeal held that a provincial ban on motorized conveyances in a wetland wildlife refuge was invalid concerning motorboats but allowable for OHVs.

Provincial legislation is a key piece of the puzzle. There’s no doubt that the province is concerned with OHVs in wet areas.  Check out the education campaign on the AESRD website and reports of enforcement efforts on the AESRD blog.   The legal issue is that outdated public land legislation is more about ownership than stewardship. This leads to “access” management when we need “recreation” management.

The Public Lands Act gives the province ownership of the “beds and shores” of all permanent and naturally occurring water bodies. Provincial ownership ends at the “bank”. The bank can be tricky to define as the Surveys Act focuses on vegetation distinctions while the common law focuses on the high water mark. The ELC’s Guide to Wetland Law and Policy concludes that permanent marshes or wetland vegetation should be part of the bed and shore owned by the province. For an example of provincial management further inland, see our post on  Buffalo Lake.

Provisions governing motorized use of lakeshores are somewhat contradictory in my view. The Public Lands Act prohibits damage to public land in general. This was enforced against OHV destruction of a creek bed in 2013 [ the Sharpe case]. The Public Lands Act also prohibits injury to the bed or shore of any lake and injury to watershed capacity. The uncertainty comes through the 2011 Public Lands Administration Regulation (“the Regulation”), which creates a baseline for public access that is best described as ‘open unless closed’. The Regulation prohibits any wheeled or tracked conveyance on the bed or shore of any permanent water body but it does not clearly cover impermanent wetlands. That means random mud bogging on vacant public land is basically legal so long as it doesn’t cause injury. Protecting seasonal wet areas requires closures, and there have been many since the 2013 flood. Closures are a blunt tool that can be unpopular, especially if unplanned and for uncertain duration. With rules this muddy, its’ no wonder that we need buddy in the titanium baseball cap to “respect the land’.

An alternative would be the recommendation of the South Saskatchewan Regional Advisory Council to ban mud bogging and destructive recreation for what it is. This could be done by strengthening the Regulation or incrementally through regional plans. The current provincial response is as much focused on providing recreational opportunities as managing impacts. Such ‘carrot and stick’ strategies can definitely help reel in outlaws (think Caribbean pirates, high school bullies or jailhouse informants). However, the focus is on trails and camps in the Green Area. This doesn’t help lakes in the White Area where recreational impacts come through municipal development and private land. There is some logic to kicking the ball to the local community, so long as the community can respond.

Municipal powers must be delegated through provincial legislation. Recreation management raises the municipal concern about ‘responsibility without power’, but municipalities also have more power than they use.

The ideal is to address recreational use through the municipal planning and development process. The Municipal Government Act lets municipalities take “environmental reserves” from land abutting the bed and shore of any lake for the purposes of preventing pollution and providing public access to the bed and shore. This can simplify management by limiting the number of private access points from which OHVs can get onto the shore. The municipality becomes the landowner so the manner of access – motorized or non – should be on its terms.  Other purposes of environmental reserves are more focused on keeping development away from environmental hazards. The Municipal Government Act is under review so the time to enable reserves for clear environmental protection purposes is now.

Reserves can only be taken on initial subdivision. This ship may have sailed given that lakes are development magnets. This situation favors creative thinking and engaging the developers. Conservation easements, bare land condominiums or land use zoning might bind a row of private units to non-motorized beach access.

An alternative municipal strategy is to flex some muscle below the bank. Municipalities are not ousted simply because the province owns the beds and shores. Municipalities have broad powers and specific powers that could be available:
• The Municipal Government Act provides broad powers to prohibit activities. These powers are intended to “enhance the ability of councils to respond to present and future issues”. Broad powers were central to the famous pesticide bylaw case of Spraytech vs. Hudson in which the Supreme Court of Canada found that municipalities are often best positioned to address local concerns.
• The Municipal Government Act specifically provides municipalities with “direction, control and management” of natural water bodies within the municipality.” The water body power was used to uphold a City of Calgary lifejacket bylaw in R v. Latouche. The case concerned boating rather than OHVs but it indicates that municipal bylaws under the water body power can regulate recreational use below the bank.

A municipal bylaw that bans OHVs from lake shores within municipal boundaries would not automatically be trumped by the province permitting motorized access. There might not be any conflict between the laws. Going back to the pesticide example, the province doesn’t force you to spray Roundup so there’s no conflict in complying with the municipal ban. Provincial consent to ride OHVs on the lakeshore doesn’t mean it must be done.

What matters is the scope of municipal power. Greater clarity from the province as to what powers have been delegated would provide municipalities with more confidence to use these powers. The City of Calgary can defend a court challenge, but how about your summer village?

As a final though on municipal powers, they suffer from the same ill as provincial regulations in that they mostly enable blunt prohibitions. Recreation management also requires proactive solutions like ordering restoration and funding stewardship work – yet another item for legislative reform.

Boots on the Ground:

Regulations don’t mean much without enforcement capacity. This is a proven challenge to managing OHVs in Alberta. Enabling the province and municipalities to enforce each others’ regulations on each others’ turf could help ease the burden.

Having provincial officers enforce municipal bylaws might create some incentive for municipalities to take environmental reserves. This option is another matter that deserves to be addressed through the Municipal Government Act review.

Likewise, municipal officers could help the province to protect its property. The Public Lands Act provides that officers can include members of police services or peace officers approved by the province. Municipal officers can be approved to enforce provincial legislation other than the Municipal Government Act through the Peace Officer Program run by the Solicitor General. The program Policy Manual states that the intention is to “meet specialized law enforcement needs”. The province would have to provide written authorization that sets out what the officers can enforce and the tactics available. OHVs are cited as an examples enforcement item in the program manual. Municipalities can enter agreements to share the upgraded officers, which could be of great assistance to small lakefront communities.

Province acknowledges destructive recreation: upped enforcement or flavor of the month?
Consistency and Accountability in Implementing Watershed Plans in Alberta: A jurisdictional review and recommendations for reform