17 May Province acknowledges destructive recreation: upped enforcement or flavor of the month?

“There’s no God-given right to mud-boggers”

(Minister of Justice and Solicitor General, Nanton News, May 13, 2013)

May long weekend is here:  begin the bush parties, litter, trucks in the river. . .  I wish I could find last year’s Sustainable Resource Development blog post about the perennial rotting couches. There will be liquor bans, fire bans, trail closures and check stops. Responsible recreationalists will understand.

Next time you head out, stop by the MD Ranchland Hall at Chain Lakes and check out “The New War Zone”, a classic  newspaper feature about the efforts of rural municipalities to address destructive recreati 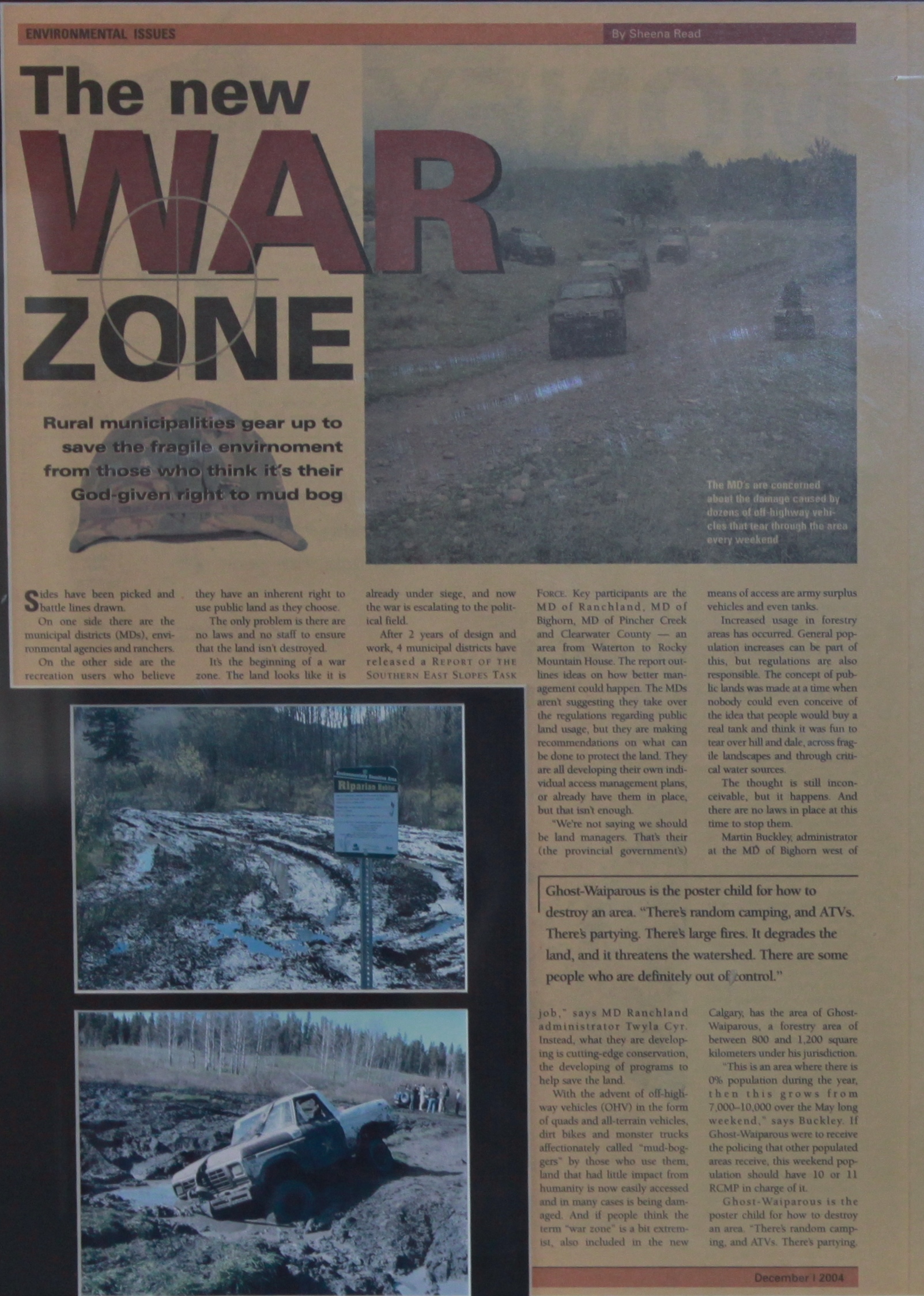 The war’s not over. In 2012 near every municipality on the Eastern Slopes met collectively with three ministers–  Justice and Solicitor General, Alberta Environment and Sustainable Resources Development, and Tourism Parks and Recreation – to request action on public use of public land.

Enforcement is always a feature in recommendations to reform motorized recreation policy.  Examples include:

This isn’t just about OHV use.  Unruly “random camping” has come up in question period, and the response asks us to expect more boots on the ground this summer. Thus, when the Solicitor General traveled to Chain Lakes for an announcement on May 13th, the real question was whether this was just the annual summer kick-off spiel or something more?  We will see a new enforcement strategy for the Eastern Slopes, or is this simply seasonal issue awareness?

Try to look past the debate over access to public land under the pending South Saskatchewan Regional Plan (for the polarized version listen to Recreation or Conservation on CBC Radio “the 180” with Jim Brown).  In reality multiple ministries are trying to deal with the impacts of destructive recreation.

In 2011, the Public Lands Administration Regulation (PLAR) created new tools to address public use of vacant land.  PLAR showed excellent efforts by Sustainable Resource Development to fit the issue under a outdated Public Lands Act that barely considers recreational use. There has been little implementation, perhaps due partly to the next change.

In 2012, officers responsible for Fish and Wildlife, Commercial Vehicle Enforcement and Parks Conservation were consolidated under the Solicitor General. This makes sense if one considers that all ‘peace officers’ have a similar enforcement functions. The ministry’s goal of consolidating enforcement services to “ensure effective specialized enforcement” could be helpful. Creating a specialized OHV enforcement force was a top recommendation from the Nova Scotia report (above).

The officer transfer creates new challenges.  All ‘peace officers’ have powers to enforce regulatory offenses but not all officers have all powers under every statute. Then there are other policing priorities.  If your job was to promote a safe Alberta, where would you put law enforcement resources?  Perhaps on Highway 63 to Fort Mac?  One can see why backroad rowdies don’t top the list.

The Information Bulletin really doesn’t promise more than the annual weekend blitz.  It does, however, give much attention to the health of public land. And it isn’t alone. The Solicitor General is blogging about the outdoors. The  Nanton News quotes our political head of public security speaking the language more commonly used by land managers-  asking users to “respect the land”, to not abuse public resources and to leave it for the future. He acknowledges resistance to a “police state” but suggests that legislation dealing with OHV issues will be reviewed.

Now note the quotes from municipal councilors on further solutions: like a real trail system.  Moving recreation up the land use planning agenda could make enforcement a whole lot easier.

The Regional ‘Plan to Plan’
Clearing the air on recreation and public land
Quads on Lake Shores: What are the rules and the state of enforcement?
South Saskatchewan Regional Plan tests the Land Use Framework
ATV Roundup: Managing motorized recreation in Alberta