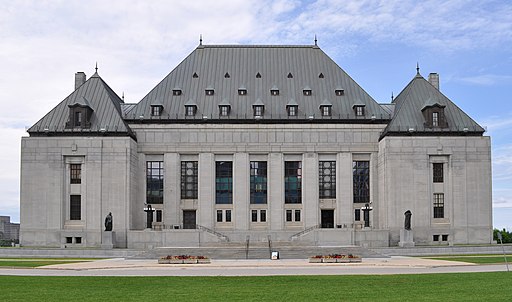 01 Oct The Supreme Court of Canada prevents a SLAPP-ing

On September 10, 2020, the Supreme Court of Canada released its decision 1704604 Ontario Ltd. v Pointes Protection Association, 2020 SCC 22 (“Pointes Protection Association”) analyzing Ontario’s anti-SLAPP legislation. While Alberta does not have equivalent legislation, this case may still have an impact on how anti-SLAPP advocacy is pursued. The case at hand made its way up from the lower courts in Ontario and focuses on the province’s Courts of Justice Act. This post takes a closer look at this decision and the legislation it relies upon.

To begin, however, it is important to understand what a SLAPP suit is.

SLAPP stands for “strategic lawsuits against public participation” and in essence, a SLAPP suit is a “lawsuit, or the threat of a lawsuit, directed against individuals or organizations, in order to silence and deter their public criticisms and advocacy for change.”[1] A SLAPP case often lacks merit and generally does not succeed in court; however, legal success in the traditional sense is usually not the goal. Instead, the goal of a SLAPP suit is to silence critics either through a protracted legal process, costs, or other challenges.[2] Due to these concerns, the threat of these lawsuits can lead to a chill on public participation.

Specifically, SLAPPs often rely on the legal action of defamation or on other civil claims, including interference with contractual relations. The law suit in the Pointes Protection Association case was based on an alleged breach of contract (in the form of a minutes of settlement agreement).

In an attempt to prevent these suits from being used as a legal tactic, British Columbia, Ontario, and Quebec have all passed anti-SLAPP legislation. In Ontario, Bill 52, the Protection of Public Participation Act, 2015 amended the Courts of Justice Act, specifically the subsection ‘Prevention of Proceedings that Limit Freedom of Expression on Matters of Public Interest (Gag Proceedings)’ and the Libel and Slander Act to establish more substantial anti-SLAPP protections in the province. Some of the main changes include:

The Pointes Protection Association case involved a development company, (1704604 Ontario Ltd. (the “developer”)), who submitted plans to develop a 91-lot subdivision in Sault Ste Marie. During the approval process, the project was met with concern by Pointes Protection Association, a non-profit corporation acting on behalf of affected residents concerned primarily with the environmental impacts of the proposed subdivision.[10] When the developer received approval from the Sault Ste Marie Region Conservation Authority, the Pointes Protection Association brought an application for judicial review, contesting the decision. Meanwhile, the development proposal was also rejected by City Council, a decision which the project proponent appealed up to the Ontario Municipal Board.[11] While both of these appeals were pending, the parties decided to settle the appeal for judicial review from the Sault Ste Marie Region Conservation Authority decision. In doing so, both parties agreed to a Minutes of Settlement.[12] It was this agreement which stated that, going forward, Pointes Protection Association would not proceed with any further court proceedings seeking the same or similar relief as that which was claimed during the judicial review process.[13]

The alleged breach of contract issue arose later, when, at the Ontario Municipal Board hearing, a member of Pointes Protection Association testified that the subdivision would result in a loss of wetland area and environmental damage.[14] Notably, despite the developer objecting to the testimony, the Ontario Municipal Board allowed it insofar as it was used for planning rather than conservation purposes.[15]

In the end,  the Municipal Board upheld City Council’s decision to deny the subdivision plan.[16] Upon receiving this result, the developer brought a breach of contract action against Pointes Protection Association, alleging that the testimony given at the Municipal Board hearing amounted to a breach of the Minutes of Settlement and claiming $6 million in damages.[17] From there, Pointes Protection Association brought a pre-trial motion under section 137.1 of the Courts of Justice Act to dismiss the action.[18]

The SCC, with a unanimous decision written by Justice Côté, agreed with the Court of Appeal, finding that the contractual dispute should be dismissed.[22] The Court provided an in-depth two-step inquiry into section 137.1 of the Courts of Justice Act. In the first step, courts are to consider the merits of the case and then move on to step 2 and the weighing of any public interests involved.

For our purposes, the relevant sections of the Courts of Justice Act are:

(3) On motion by a person against whom a proceeding is brought, a judge, shall, subject to subsection (4), dismiss the proceeding against the person if the person satisfies the judge that the proceeding arises from an expression made by the person that relates to a matter of public interest.

a) There are grounds to believe that,

i. The proceeding has substantial merit, and

ii. The moving party has no valid defence in the proceeding; and

First, the party bringing the pre-motion application must demonstrate that the proceeding arises from an expression relating to a matter of public interest.[23] From there, the responding party has a chance to satisfy the judge that there are grounds to believe that the original motion has substantial merit and the party bringing the section 137.1 motion has no valid defence.[24] In doing this, the responding party (i.e. the plaintiff in this case) must demonstrate that the public interest in permitting the proceeding to continue outweighs the public interest in protecting the expression. If this burden is not met, then the section 137.1 motion is granted and the originating proceeding is dismissed.[25]

To begin this legal analysis on the facts at hand, the Court began by looking at the testimony made by Pointes Protection Association in front of the Municipal Board Hearing. In doing so, they sought to evaluate if the statement should be rightly considered an expression that relates to a matter of public interest; therefore, meeting the threshold burden under section 137.1(3).[26] The Court determined that it was a matter of public interest and, in doing so, referred to the large group of people who would be affected and the substantial media coverage of the project proposal and subsequent legal proceedings.[27] As this is the statement that is being alleged as a breach of contract by the developer, it can be concluded that the breach of contract action arose from an expression that relates to a matter of public interest.[28]

Once this first step was established, the Court moved on to an analysis of section 137.1(4)(a). This section requires the developer to show that there are grounds to believe that the breach of contract action has substantial merit and that the defendant, in this case Pointes Protection Association, has no valid defence.[29] Referring to the Minutes of Settlement, the Court found that the ‘contract’ referred only to the judicial review process started after the Sault Ste Marie Region Conservation Authority decision came out. Considering this, the Court stated that there was nothing in the Minutes that precluded Pointes Protection Association from advancing evidence in an unrelated matter – the Municipal Board hearing.[30] If the Minutes of Settlement would have been considered a bar to this testimony, the SCC found that it would have had to rely on an implied term in the contract, something which the Court found to be an incorrect interpretation.[31] In making this finding, the Court stated that because there is no substantial merit to the action, there is no need to go on to analyze Pointes Protection Association’s possible defences.[32] The Court concluded that the burden on the developer was higher than a motion to strike “which requires that the claim have some chance of success” and lower than the “strong prima facie case” which is used in summary judgment applications; two other tools that are aimed at efficiently dealing with lawsuits.[33]

The Court also makes sure to note that regardless of whether the developer’s action had substantial merit or not, the action should be dismissed because the public interest in protecting Pointes Protection Association’s speech outweighed any harm that may result from the expression.[34] Justice Côté writes, “the public has a strong interest in the subject matter of the expression, which relates to the ecological impact and environmental degradation associated with a proposed large-scale development. Second, the form of the expression, namely testimony before an adjudicative tribunal, militates in favour of protecting it.”[35]

Beyond the technical interpretation of the provision under scrutiny, which will be of interest to some lawyers, the relevance of the case and its confirmation of Ontario’s “anti-SLAPP” legislation are an important victory for proponents of civic engagement.  Engagement and expression related to public interest outcomes, like environmental protection, should not be easily derailed by an unfounded law suit.

Lawsuits are time consuming, resource intensive, and expensive and SLAPP suits often pit large corporations against small or grassroots organizations. This imbalance means that despite a case’s merits, the party with the most resources can outlast small community run organizations.  These lawsuits are not about justice, they are about silencing critiques.

Fighting these illegitimate suits may cause a group to, at worst, wind up, due to the financial risks, or at best, divert funds to legal fees rather than other public interest projects. Court proceedings are prohibitively expensive and delays in the Alberta court system also lead to long wait times, further exacerbating the issue.

The fear of being SLAPPed also deters other people from participating in controversial issues of public interest – this is an example of SLAPP suits effect on the ‘civic climate’. Unfortunately, the failure of the SLAPP plaintiff to win the case does not necessarily counter the chilling effect it has on subsequent public participation.[36] Clearly, it is not legal success which is the main concern. The existence of an ongoing suit can also divert media attention away from a group’s original campaign towards a controversial lawsuit, thereby further derailing the original work.

Further, SLAPPs affect the monitoring and enforcement of environmental laws and the activities of polluters. Research suggests that SLAPPs have measurable negative impacts on the enforcement of environmental laws and allow polluters to generally take a less diligent approach to pollution abatement.[37] Clearly, SLAPP suits divert resources and attention from the areas that need them most.

Unfortunately, Alberta does not yet have any anti-SLAPP legislation, making this decision less applicable to organizations advocating for environmental protection in this province. However, the SCC’s decision clarifies how effective “anti-SLAPP” legislation can be framed, providing a model for a future Alberta statute. If done effectively, Albertans could use this legislation to parry an ill-conceived SLAPP suit and protect freedom of expression.