Home » The ELC Blog » I Do So Like Green Regs and Ham! Thank You! Thank You! 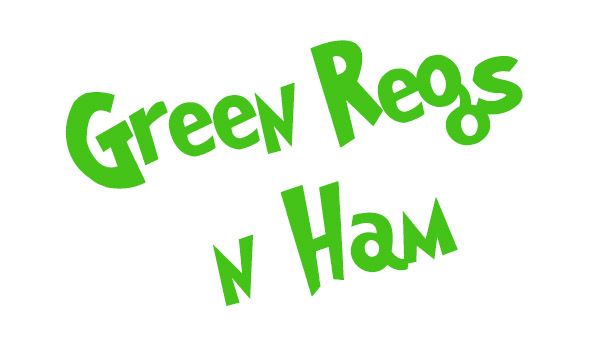 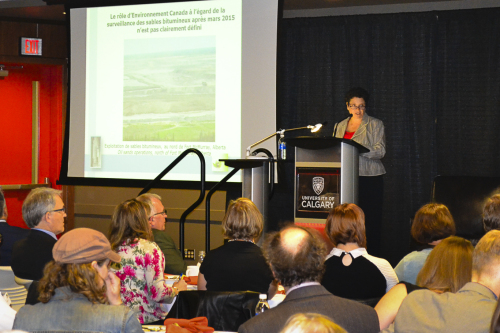 The ELC hosted its third annual Green Regs and Ham Breakfast event to a sold-out crowd in Calgary at the University of Calgary downtown campus earlier this month. Our event featured Julie Gelfand – Canada’s Commissioner of Environment and Sustainable Development – as our keynote speaker. We were also joined by panelists Nigel Bankes (Faculty of Law, University of Calgary), Gordon Lambert (GRL Collaboration for Sustainability and Member of the Alberta’s Climate Change Strategy Panel) and Ben Thibault (Director of Electricity Program, Pembina Institute).

It was a very lively and timely discussion on what Canada and Alberta need to do to show their strong climate commitments in view of the upcoming Paris Climate Conference in December 2015. This global event has been touted as the “world’s last best chance to reach an agreement on cutting carbon emissions” (see January 1, 2015 Editorial in The Guardian available at

In her capacity as Federal Commissioner of Environment and Sustainable Development (CESD) in the Office of the Auditor General, Julie Gelfand provides parliamentarians with objective, independent analysis and recommendations regarding the federal government’s management of environmental and sustainable development issues. Our summary of the most recent 2014 CESD Report is available at https://elc.ab.ca/is-canada-prepared-to-meet-the-challenges-of-the-future/

At our breakfast event, Ms. Gelfand discussed two significant highlights of the 2014 CESD Report: oil sands monitoring and climate change mitigation. On the topic of oil sands monitoring, Ms. Gelfand noted that the monitoring programs are generally on time and on budget. However, she noted that the federal government needs better engagement with stakeholders including First Nations in the region. As well, integration of the various type of monitoring being conducted (air, water and wildlife) is lacking and must be improved.

On the topic of climate change mitigation, Commissioner Gelfand found that Canada will definitely miss its 2020 emission targets under the Copenhagen Accord. Further, while some regulations have been put into place, Ms. Gelfand pointed out that other regulations that the Federal government promised have not materialized, notably its greenhouse gas reduction regulations dealing with the oil and gas sector and with specific industries such as pulp and paper. The Commissioner has recommended that the Federal government create detailed strategies of its measures and timelines. As well, she recommended that it provide regular assessments and reporting on its climate change actions.

Although Ms. Gelfand was not at liberty to discuss the CESD’s ongoing environmental audit, the audience did get a sneak peek at upcoming topics of its 2015 CESD Report. In December 2015, the CESD will look at pipeline safety and the National Energy Board’s role in pipeline regulation, and at pesticide regulation (especially neonicotinoids). In Spring 2016, the CESD will be reviewing topics relating to sustainable communities, adverse weather, and consumer products. 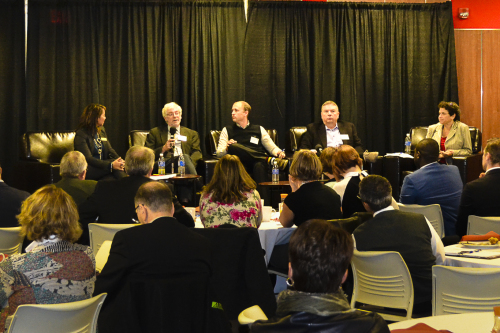 Highlights of our Panelists’ Comments

Nigel Bankes, Gordon Lambert and Ben Thibault had the opportunity to share their thoughts on what Canada and Alberta need to do to show their strong climate commitments in view of the upcoming Paris Climate Conference in December 2015.

The panel discussion opened with the comments of Nigel Bankes, a professor at the University of Calgary, Faculty of Law. Professor Bankes described the federal approach to climate change mitigation as “delay, delay, delay”. It is clear that the federal government has no coordinated plan to meet its 2020 greenhouse gas reduction commitments under the Copenhagen Accord. There has been a lack of transparency in the development of greenhouse gas regulations and in distinguishing greenhouse gas reductions arising from economic slowdown versus concrete, positive actions to actually reduce emissions. There has also been a lack of commitment to learning for the purposes of developing future climate regulatory frameworks.

Professor Bankes stated that Canada has “zero” credibility in the climate file because it has failed to develop any credible plans to meet its greenhouse gas reduction commitments to the Kyoto Protocol, from which Canada eventually withdrew. Likewise, despite Canada’s submission of its Intended Nationally Determined Contributions (see http://www4.unfccc.int/submissions/indc/Submission%20Pages/submissions.aspx), Canada has no clear and comprehensive plan to meet its 2020 targets under the Copenhagen Accord or its 2030 greenhouse gas reduction targets.

Canada needs to make a credible commitment to GHG reduction and climate change mitigation.  In order to meet its GHG reduction targets, Alberta requires transparency, cost-effectiveness and a system designed to avoid gaming. All these requirements would be better addressed with a carbon tax than with a cap and trade approach.

Gordon Lambert, with the GRL Collaboration for Sustainability and a member of Alberta’s Climate Change Strategy Panel, brought our attention back to the important work of the Brundtland Commission. He reminded us that we should not overlook the interdependence of environment, economy and social factors in sustainable development.

Mr. Lambert observed that, when faced with daunting challenges, our society often reverts to creating opposing forces and silos. In this regard, Mr. Lambert cited the innovative work of COSIA which aims to break down traditional silos by sharing technologies and intellectual property to reduce the environmental impacts of oil sands development (for more about COSIA, see https://www.cosia.ca/).

Finally, Mr. Lambert noted that a clean energy transition in Alberta is necessary because its past energy choices were made when climate change wasn’t on the radar screen.

Ben Thibault, Director of Electricity Program at the Pembina Institute, provided a very thematic discussion of green regs (climate regulations) and ham (a“pig”ouvian carbon tax). He stated that the climate change challenge of both the Federal and Alberta governments will be addressed with a combination of carbon pricing, renewable energy development and reduction in fossil fuel dependency.

Mr. Thibault criticized the current federal sector-by-sector regulatory approach to greenhouse gas reduction as being ineffective. The only sectors addressed thus far have been vehicle emissions (which Canada has little control over because there is an integrated North American approach) and coal-fired power plants (which will do little to reduce coal dependency). Mr. Thibault stated that this is not an effective and workable approach for Canada to achieve genuine greenhouse gas reductions. 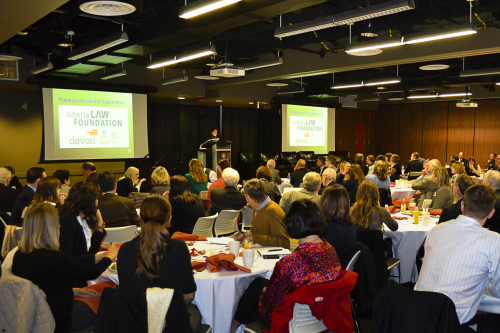 After the presentations, Commissioner Gelfand and the panelists participated in a lively and engaging Q&A discussion with the audience.

Remember… Unless someone like you cares a whole awful lot, nothing is going to get better. It’s not.

A huge thank you to our distinguished speakers, to our sponsors and, of course, all our wonderful supporters for caring a whole awful lot. See you next year for another hearty serving of green regs and ham!