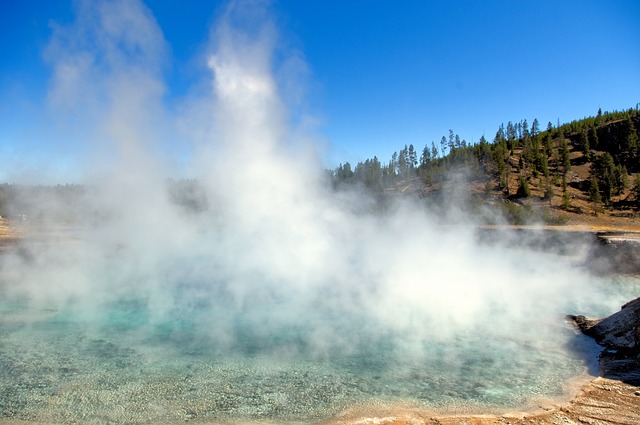 Regulating Geothermal: How do we own heat?

Part One: An Introduction to Mitigation in Alberta

This blog post focuses on geothermal, taking a closer look at the lack of a regulatory regime for geothermal in the province. This post, as well as the accompanying section in the Mitigation volume are designed to be introductory pieces, however, the ELC will be publishing an entire report on geothermal in the coming year. Check back later for this report.

The Environmental Law Centre (ELC) recently published its report on Climate Change and the Law which consists of two parts: Part One – An Introduction to Mitigation in Alberta and Part Two – An Introduction to Adaptation in Alberta. Part One introduces readers to the idea of mitigation and how it can help Alberta meet its climate goals. Part Two provides a broad overview of the issues Alberta is likely to face due to climate change and the legal tools and measures that can assist with adapting to these issues. This blog post is part of a short series that highlights and features select excerpts from the report. 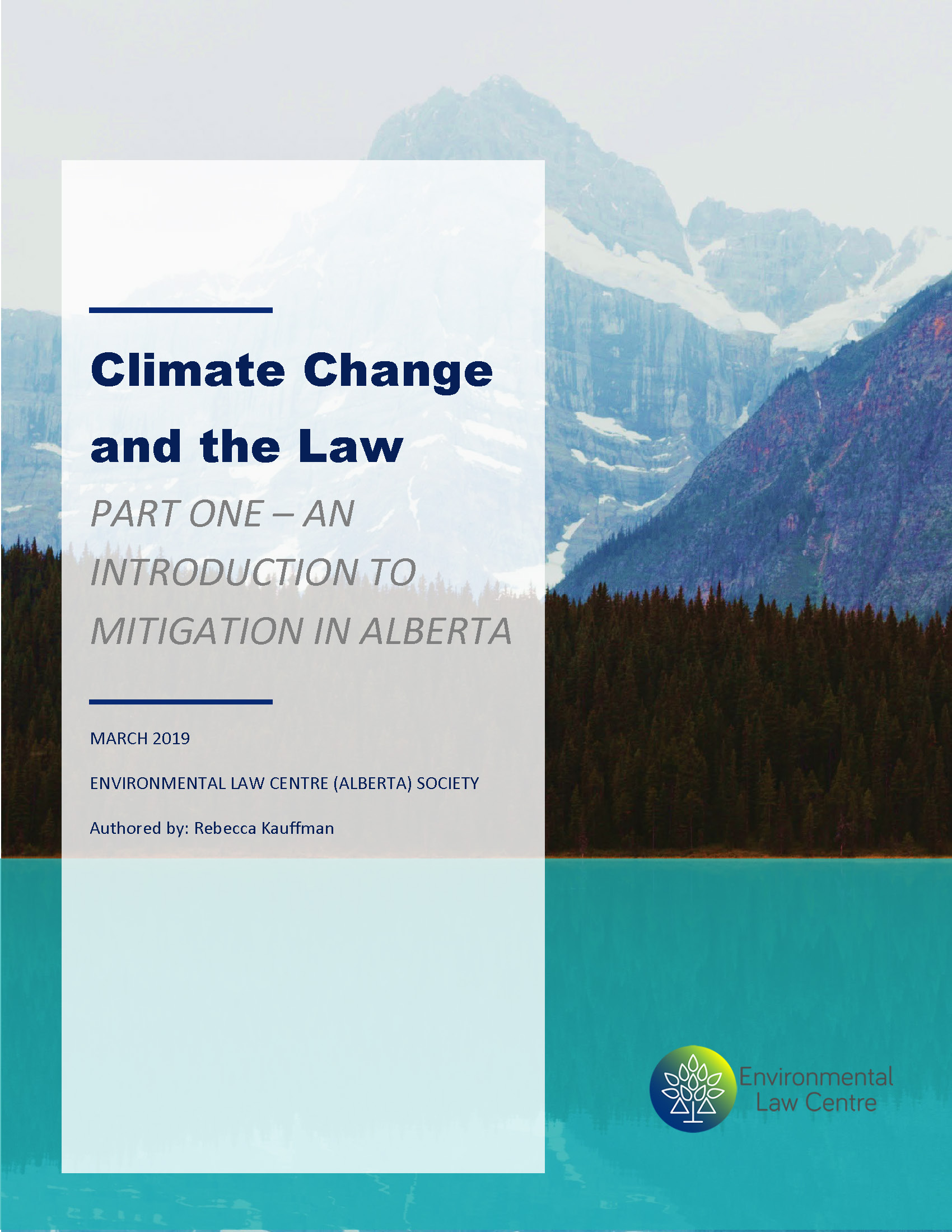 Climate Change and the Law: An Introduction to Mitigation in Alberta by Rebecca Kauffman

Climate Change and the Law: An Introduction to Mitigation in Alberta
March 27 2019 by Rebecca Kauffman

Part One: An Introduction to Mitigation in Alberta

To begin, it is important to note that, as of mid 2019, there is no commercial geothermal anywhere in Alberta. Meanwhile, Saskatchewan has already started work on a commercial geothermal project.[1] This lack of geothermal technology being employed in Alberta is important because, although a transition away from fossil fuels towards any form of renewable energy has proven to be difficult, the transition to geothermal in Alberta should be relatively pain-free. This is in part because of our extensive oil and gas industry which has provided Albertans with an in-depth knowledge of the underground substrate. Alberta also has an abundance of geologists, engineers, drillers, and other oil patch workers – all of whom have skills that are easily transferable from oil and gas to geothermal.

The answer to this is complicated and relies on a myriad of factors, however, one of the reasons may be because there is no regulatory framework for the development or oversight of geothermal in the province.

To understand some of the challenges that arise when attempting to legislate geothermal, the first question that needs to be clearly answered is – if we were to regulate geothermal, how do we legally define it – is it water or is it a mineral? The second question is then, how do we own heat and if it can be owned, who would be the owner – the owner of the water or the owner of the minerals?

Currently, Alberta does not have a regulatory system for the ownership of heat. This is not unique to Alberta and despite geothermal technology becoming more common across the globe, there is no consensus on how to legally define geothermal resources.[3] Despite the lack of consensus, regardless of whether Alberta decides to define geothermal as water or as a mineral, the regulatory process must be clear and streamlined, while taking into account regulatory decisions made by neighbouring provinces – due to the potential for interprovincial trade and projects.[4]

Let’s start with the assumption that geothermal has been defined as a mineral, rather than as water – what are some of the ways geothermal could be incorporated into new or existing Alberta legislation?

Due to the extensive oil and gas network in Alberta, it may be easiest to incorporate geothermal under the umbrella of the Alberta Energy Regulator (AER) – the Regulator with the most familiarity with drilling processes. In this scenario, geothermal would need be defined as a mineral and would be under the control of the owners of these minerals. For example, to do so, the Mines and Minerals Act, which falls under the auspices of the Alberta Energy Regulation, could be amended to include geothermal in the definition of “minerals” at subsection 1(1)(p)(i).[5]

The Mines and Minerals Act gives the Lieutenant Governor in Council the power to make regulations respecting everything from the exploration for, and development of, minerals, to the payment of royalties.[6] This power could be extended to regulate geothermal thus eliminating the need to create a dedicated statute.[7]

In contrast, the Petroleum and Natural Gas Tenure Regulation would govern geothermal tenure as it does for petroleum and natural gas.[11] This would be a relatively easy accommodation because petroleum, natural gas, and geothermal all use similar extraction methods, especially in comparison to the extraction of metallic and industrial minerals. However, adding geothermal to this regulation would require an amendment to Part 4 of the Mines and Minerals Act, the part of the Act which currently defines natural gas and petroleum.[12]

If geothermal was defined as a mineral, future geothermal development would likely be governed by the AER and all approvals and permits would need to first be approved by the AER.

It is well established that the provinces, including Alberta, have jurisdictional control over natural resources. However, should geothermal be defined as ‘water’ and a geothermal aquifer cross interprovincial or international borders, it could trigger federal involvement. This is due to the fact that the federal government has jurisdiction over both transboundary waters and international treaties.[13] These decisions could also impact whether or not Water Act approvals or licences[14] would be needed prior to receiving approval for geothermal power plants.

In the event that geothermal is not considered a mineral but rather is defined as water, it wold fall under the control of the Hydro and Electric Energy Act[15] and the regulatory process would be governed by the Alberta Utilities Commission (AUC) and Alberta Environment and Parks (AEP). It would then follow the same regulatory process as the other sources of renewable energy, described in the section “Regulatory Framework for Renewable Energy in Alberta” in the Mitigation Guide. If this was the case, Water Act approvals and environmental assessments under the Environmental Protection and Enhancement Act (EPEA) may also be triggered.

In conjunction with the AUC approval process, project proponents may also be required to seek and obtain approvals from AEP. Rule 007 sets out some of the cases where this may be required including if the applicant is proposing a major development or if the application is for a thermal power plant (this may be triggered by a geothermal project) greater than 1 MW that requires an industrial approval application be submitted to AEP.[17] Overall, in Alberta, power plant operators, including geothermal fueled power plants, would also likely be expected to comply with the provincial EPEA.

Although this regulatory regime may be used to govern geothermal development in Alberta, as of writing, there have been no applications submitted to the AUC for approval of a geothermal project.

A third option would be to create a new geothermal-specific regulation.

In addition to the benefits of increased renewable energy, which are discussed in more depth in the Mitigation Guide, Geothermal may also become an asset for orphaned and abandoned wells across the province. The Orphan Well Association is responsible for remediating hundreds of orphan wells scattered across the province and geothermal may help get some of these wells back to work – albeit in a different capacity, saving millions of dollars in remediation costs. Currently, the number of orphan wells is increasing in Alberta, spurred on by a growing number of insolvent or bankrupt oil and gas companies.

Recently, the Supreme Court of Canada (SCC) released its decision in Orphan Well Association v Grant Thornton Limited. In this case, the majority of the SCC found that the regulatory system put in place by the AER, which requires bankrupt oil and gas companies to pay for clean-up despite being in bankruptcy proceedings, was not in conflict with the Bankruptcy and Insolvency Act. The Court found that bankruptcy was not a licence to ignore rules and provincial laws. This was a positive decision from an environmental perspective because it ensured that oil and gas companies could not use bankruptcy to avoid environmental obligations. However, this case did not deal with those companies that simply do not have sufficient assets to pay for the necessary clean up. This means that, despite this SCC decision, if a company does not have the money to properly remediate a well, clean up will still fall to the taxpayer. This is where geothermal comes in.

Retrofitting these wells for geothermal may be one way to keep the cost of cleaning up some of the thousands of orphaned wells from falling to Albertan taxpayers. Many oil and gas wells are located in areas suitable for geothermal energy and although this would not be suitable for all orphan wells, it would help to speed the process along and lower the associated costs.

In fact, in February 2017, Matt Jeneroux, a conservative MP representing Edmonton Riverbend tabled Motion 122, a private members bill, calling on the federal government to encourage geothermal initiatives to clean up orphan and abandoned wells in western Canada. The Motion text states: “That, in the opinion of the House given the economic crisis facing Western Canada, the need to diversify Canada’s economy with a focus on creating jobs and environmental sustainability, and the significant potential for the conversion of abandoned oil wells across the country, the Government should consider: (a) making the required legislative and regulatory changes in order to support the development of the Geothermal industry in Canada; and (b) expanding Federal program funding opportunities for Geothermal technology initiatives.”[18]

This proposal has fallen from the news but it does serve to demonstrate that the idea of initiating geothermal development in Alberta may be a non-partisan issue and may have positive outcomes, beyond reduced GHG emissions.

However, in order to implement these policies, we will first need to establish a regulatory regime for geothermal in Alberta. Our forthcoming geothermal report will take a closer look at how this should be done. In the meantime, stay tuned for next week’s blog post  which will dive deeper into some of the topics covered in the adaptation report.