The Environmental Law Centre (ELC) recently published its report on Climate Change and the Law which consists of two parts: Part One – An Introduction to Climate Change Mitigation in Alberta and Part Two – An Introduction to Climate Change Adaptation in Alberta. Part One introduces readers to the idea of mitigation and how it can help Alberta meet its climate goals. Part Two provides a broad overview of the issues Alberta is likely to face due to climate change and the legal tools and measures that can assist with adapting to these issues. This blog post is part of a short series that highlights and features select excerpts from the report. 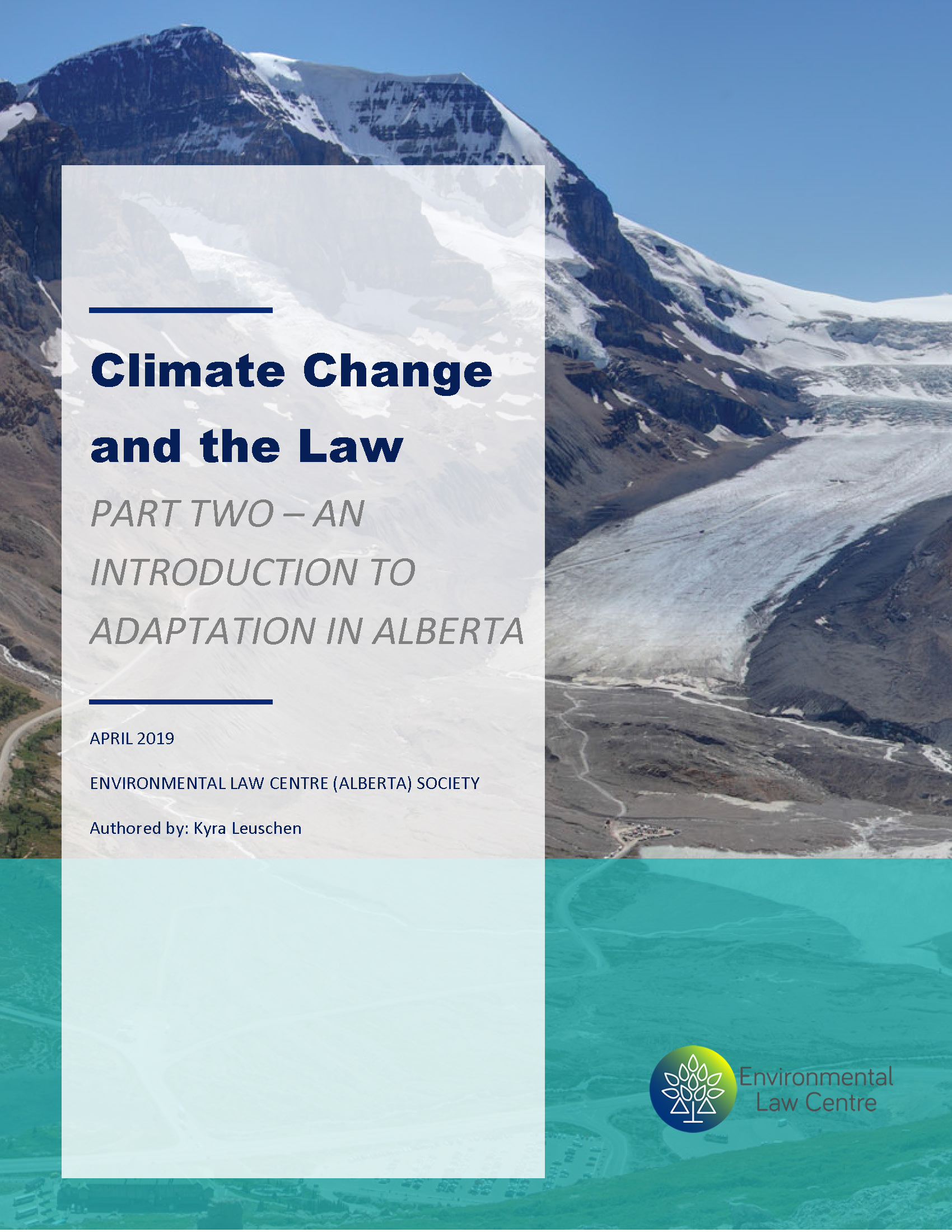 Climate Change and the Law: An Introduction to Adaptation in Alberta by Kyra Leuschen

Climate Change and the Law: An Introduction to Adaptation in Alberta
March 27 2019 by Kyra Leuschen

Part Two: An Introduction to Climate Change Adaptation in Alberta

Previously, with respect to adaptation, we discussed how Alberta’s vital infrastructure, including water, transportation, and building infrastructure, is likely to be impacted by climate change and which legal tools can assist with adaptation. In our third and final blog post on this topic, we consider the impact of climate change on Alberta’s biodiversity and human health, along with the legal adaptive measures that can help.

Alberta is home to six major ecosystems and an estimated 60,000 species.[1] Why does this biodiversity matter? Biodiversity and its associated “ecosystem services” are important because they help provide clean air and water, climate regulation, carbon storage, pollination, and flood regulation along with the raw materials for food, shelter, clothing and medicine.[2] Biodiversity is also critical to various economic sectors such as agriculture and tourism.

Climate change is likely to cause shifts in species distribution including expansion, contraction and fragmentation in species-specific patterns.[3] Among other things, this could cause changes to the timing of life history events, which can create phenological mismatches (i.e. when migrating species arrive at a site after peak prey availability has passed), and hybridization (i.e. interbreeding between two animals or plants of different species). Both can drive rare species into extinction or increase the adaptability of others by introducing greater genetic variation.[4]

Meanwhile, in aquatic ecosystems, water temperature is a principal determinant of fish survival and reproduction.[5] Warming will affect the habitat of many fish species, increasing the potential habitat for invasive species and creating favourable conditions for unwanted algal blooms[6] Warming is also associated with a range of physiological stresses that affect species health, such as hypoxia.[7]

In addition, the cumulative effects of climate change, other disturbance regimes, and human-induced stresses are likely to threaten many species. For instance, habitat fragmentation is an impediment to range expansion (and therefore the adaptive success) of various plant, animal, and aquatic species.[8] Water pollution, wetland drainage and lowering of the ground water table have significantly degraded freshwater ecosystems in much of North America over the past 60 years and, in combination with climate change, will continue to lead to changes in aquatic biodiversity.[9] Forest fires are expected to increase significantly and invasive species such as the mountain pine beetle will disproportionately benefit from climate change.[10]

Nevertheless, there may be some opportunities. Forest productivity could increase with higher atmospheric CO2 concentrations and longer growing seasons.[11] Warming may allow certain species to move North and occupy niche spots in new habitats.[12] In addition, by the end of the century more lakes in northerly locations will provide suitable habitat for warm water species.[13]

Generally speaking, ecosystems have natural responses to new environmental situations and can make autonomous adjustments. In the face of climate change, however, these responses are considered insufficient to halt the loss of biodiversity and the ecosystem services it provides. Going forward, “planned adaptation” that is aimed at maintaining or restoring biodiversity and ecosystem services will be required.[14]

A key component of resilient ecological systems are conservation networks made up of parks and other types of protected areas.[15] These conservation networks help to protect intact ecosystems which are critical for the conservation of biodiversity in periods of rapid environmental change. They also provide habitat for native species and opportunities for autonomous adaption, migration, and natural selection processes through maintenance of genetic diversity.[16]

Parks and other protected areas in Alberta are primarily regulated by the Provincial Parks Act, the Wilderness Areas, Ecological Reserves, Natural Areas and Heritage Rangelands Act, and Willmore Wilderness Park Act. Adopting or amending legislation that strengthens protections for Alberta’s existing parks and protected areas is a powerful adaptation measure.

All levels of government should also expand existing parks and protected areas, or create new parks altogether. In accordance with the Aichi Biodiversity Targets, Alberta (along with the other provinces and territories) has set a target of protecting at least 17 per cent of its terrestrial lands by 2020.[17] As of June 2018, 14.6 percent of Alberta land was protected: 8.2 percent as National Parks and 6.4 percent as provincial protected areas.[18] However, the addition of the proposed protected lands in the Bighorn backcountry would increase Alberta’s total protected area to 15.2 percent.[19] The newly created Kitaskino Nuwenëné Wildland Provincial Park also adds an additional 1618 square kilometres (or an additional 0.2 percent of protected area).[20]

Another adaptation measure is to connect these protected areas through sustainably managed landscapes and waterscapes. Connectivity permits species migration into new areas, facilitates gene flow, and provides food, water, and shelter during periods of natural scarcity or disturbances.[21] The connection of protected areas can be fostered through federal and provincial parks legislation, land planning legislation (e.g. Regional Plans under Alberta Land Stewardship Act, Forest Management Plans under the Forests Act), and Alberta’s Municipal Government Act. An example would include the Yellowstone to Yukon Conservation Initiative which aims to create an interconnected network of protected lands (i.e. a 3,200 kilometre “movement corridor”) that runs from Yellowstone National Park to the Yukon Territory.[22]

Adaptation may also be achieved through supporting species recovery and restoring degraded ecosystems.[23] Ecological restoration can have far-reaching impacts. For example, the restoration of beaver populations (that influence wetland hydrology and enhance water retention) in Elk Island National Park has led to significant increases in open water areas, even during dry years.[24] These activities would require strengthening and/or enforcing legislation such as the federal Species at Risk Act and Alberta’s Wildlife Act and pursuing the adoption of endangered species legislation.

Climate change is expected to bring with it a wide range of health risks to Albertans. These include:

There do not appear to be any opportunities for human health as a result of climate change.

Given the breadth of probable human health impacts, adaptation will require mainstreaming climate change considerations into a wide variety of legislation, regulatory instruments, and tools that influence health and well-being.

Adaptive measures could include updating public health legislation and policies to provide for the identification and assessment of vulnerable populations, increased public awareness and education promoting personal protection from climate change related health risks, and strengthened monitoring and alert systems during heatwaves, reduced air quality events and other extreme weather.[32] Still other adaptation methods include improving disease or health surveillance and/or monitoring methods and prevention, such as vector control and vaccinations.[33]

Adaptation could also be furthered by strengthening building codes and municipal land planning legislation to improve the quality of housing stock and infrastructure, as well as develop infrastructure such as green roofs, reflective road/building surfaces, and urban green spaces with the purpose of eliminating or reducing heat islands.[34]

Going forward, plants, animals and human beings in Alberta are all likely to face tremendous challenges from climate change. Threats to biodiversity put vital ecosystem services such as pollination, water purification, and forage production at risk, whereas impacts such as smog, vector-borne diseases, wildfires, and heat waves endanger human health. Once again, adaptation is a crucial part of the fight against climate change. For more information on this topic continue reading  Part Two – An Introduction to Adaptation in Alberta.. Alternatively, for information on how mitigation can help to reduce the impacts of climate change altogether check out the first part of the ELC’s Climate Change and the Law report, Part One – An Introduction to Mitigation in Alberta.

[2] P. Nantel et al., 2014: Biodiversity and Protected Areas in Canada in a Changing Climate: Sector Perspectives on Impacts and Adaptation, edited by F.J. Warren and D.S. Lemmen, Government of Canada, Ottawa, ON, 159-190 at 162 online: https://www.nrcan.gc.ca/sites/www.nrcan.gc.ca/files/earthsciences/pdf/assess/2014/pdf/Chapter6-Biodiversity_Eng.pdf [Nantel, 2014: Biodiversity and Protected Areas].