Are We Just Winging It? Legislative protections for bats: A Bat Week Blog

Home » The ELC Blog » Are We Just Winging It? Legislative protections for bats: A Bat Week Blog 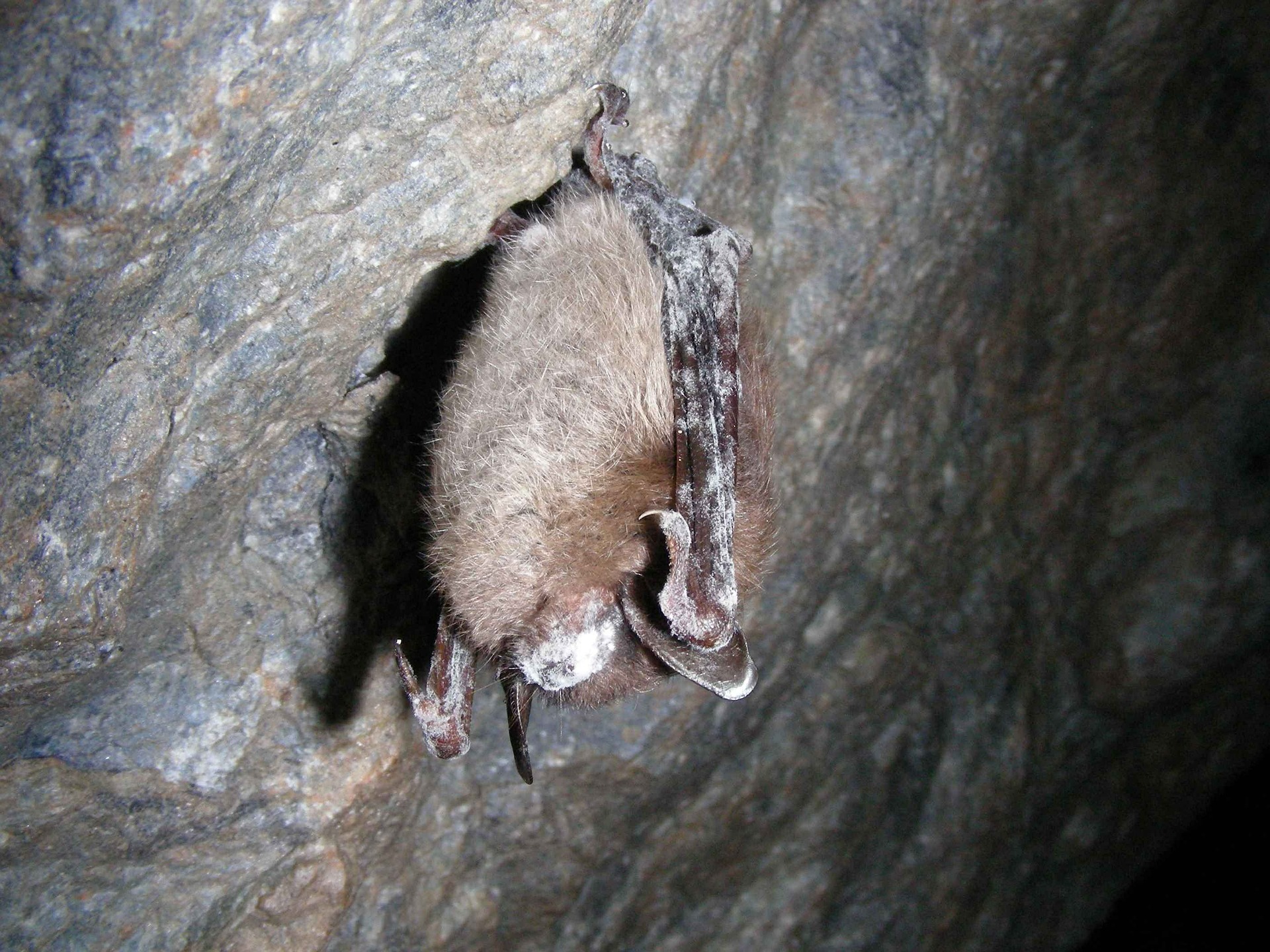 29 Oct Are We Just Winging It? Legislative protections for bats: A Bat Week Blog

I am a huge bat fan.  Before entering law I assisted in field work related to the roosting habits of two bat species: the Northern long-eared myotis (Myotis Septentrionalis) in Northern BC and Disc winged bats (Thyroptera tricolor) in Costa Rica. My interest and love of bats is one thing but the law is another. Bats play significant ecological and economic roles that should be of concern to all Albertans. Do our laws show our bats love? Or are we just winging it?

Bats in Canada under threat

Like any plant or animal species, the various species of bats that make Alberta home are threatened by direct mortality, disease, and habitat alteration to name a few factors.  This blog focuses on three areas of threats in Canada/Alberta: intentional killing by humans, white nose syndrome, and impacts from an expanding wind power sector.

The most talked about threat for bats in Canada is white nose syndrome, a fungal infection that causes widespread mortality in hibernating bats throughout North America.

The Alberta Community Bat Program notes that the fungus appears to have originated in the old world bats (which range in Africa, Asia and Australia) and that people may have been responsible for bringing it to North America. The embedded map shows the extent of white nose syndrome as of August 2019 (source White-Nose Syndrome Response Team).   White nose syndrome has caused catastrophic declines in some bat species. 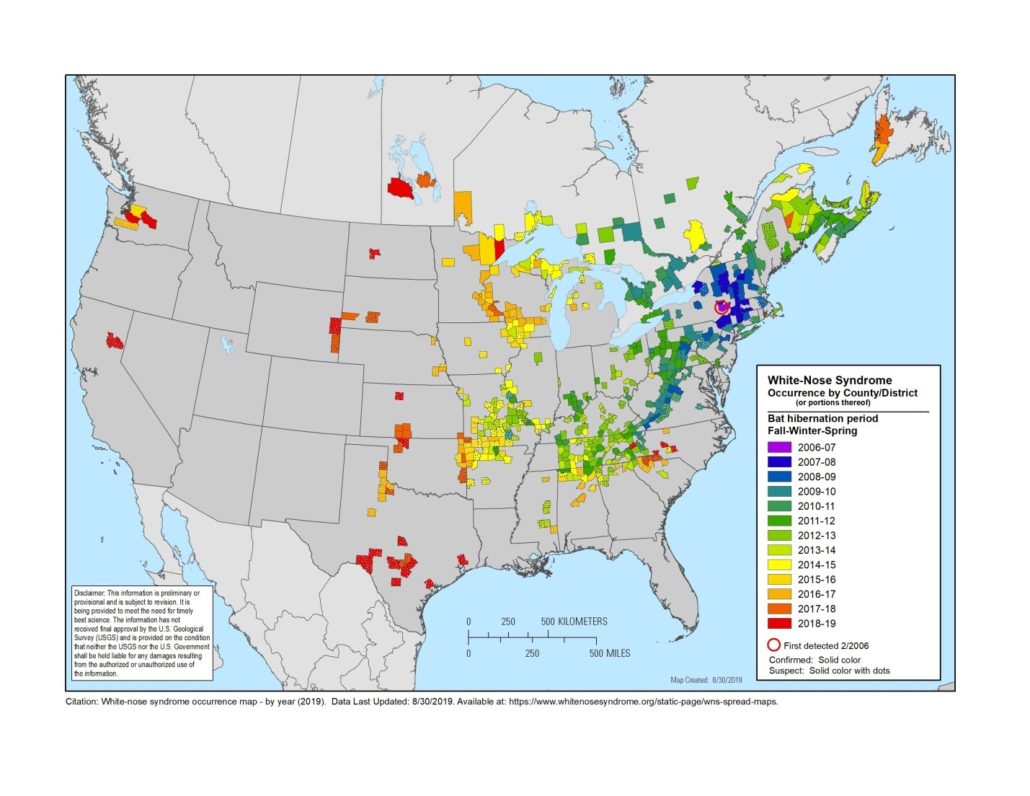 Just like their bird cousins, bats are susceptible to being killed by wind turbines. Research has estimated that cumulative annual bat deaths in the continental US for 2013 and 2014 ranged between 200,000 and 800,000. (see Allison, T. et al., (2019). Impacts to wildlife of wind energy siting and operation in the United States) 21 Issues in Ecology 1-24).

Studies of bat mortalities at several Alberta sites conducted by Baerwald and Barclay (of the University of Calgary) found mortality > 23.5 bats/turbine/year at four sites (as cited in Bat Mortality at a Wind Power Facility in Central Canada ). Mortality is thought to occur through direct collisions and barotrauma (which is physical damage caused by air pressure differences) (see Erin F. Baerwald et. al., Barotrauma is a significant cause of bat fatalities at wind turbines (2008) Current Biology 18:16)

Federal, provincial and municipal laws are relevant to successfully mitigating mortality of bats and ensuring sufficient habitat. For the purpose of this blog, we focus on provincial laws with only a brief mention of federal law in relation to the direct threats of mortality.

Alberta’s Wildlife Act was born from regulating hunting activities, and has a focus on game birds, and game and fur-bearing mammals. However, the Act has slowly evolved to apply to other species. Bats are designated under the Wildlife Act as either “non-game animals” or “non-licence animal” meaning it extends some protections to bats. The Wildlife Act prohibits the hunting of non-game animals (which includes some bats). Hunting is broadly defined to include:

(ii)    chase, pursue, follow after or on the trail of, search for, flush, stalk or lie in wait for,

This provision offers protection to those bats listed as non-game animals from intentional killing (as well as harassment and capture). Unfortunately two bat species are listed as non-licence animals, meaning they can be hunted without a licence.

In addition, under the Wildlife Regulation possession of bats is illegal except for the where that possession is temporary and is “for the purpose of capturing it and relocating it from that person’s property” (s.135(2) of the Wildlife Regulation). The Wildlife Act also prohibits certain activities that impact the nests and dens of bats: 36(1)  A person shall not wilfully molest, disturb or destroy a house, nest or den of prescribed wildlife or a beaver dam in prescribed areas and at prescribed times.

This applies to nests and dens (i.e. roosts) of “bats throughout Alberta and from September 1 in one year to April 30 in the next” and “to the dens of bats, excluding those constructed by human beings, used as hibernacula, throughout Alberta and throughout the year” (Wildlife Regulation, s.96). Impacts on dens/roosts may be permitted where ministerial authorizations are granted(s. 36(1)).

White nose syndrome has yet to reach Alberta. However, given its devastating impacts and steady progress toward Alberta, there must be a concerted effort for proactive policy and programs addressing the threat. Unfortunately, much of the existing laws are focused on responding to an disease outbreak rather than preventing one (such as the Federal Health of Animals Act).

Some proactive steps include putting limits on access to hibernating areas (such has been done with Cadomin Cave near Hinton) and monitoring hibernacula.

Also of note is that several species of bats have been listed as endangered under the Species At Risk Act due to impacts of white-nose syndrome. This includes the Little Brown Myotis, the Northern Myotis and the Tri-coloured bat (both Myotis species occurring in Alberta). A recovery strategy for the three species was posted late in 2018. The recovery strategy notes “Any site where hibernation by Little Brown Myotis, Northern Myotis and/or Tri-colored Bat has been observed at least once between 1995 and 2018 is identified as critical habitat.” While this characterization of critical habitat doesn’t immediately protect the hibernacula it provides a discretionary backstop if provincial laws are found to be inadequate. Hibernacula of concern are identified by general location in the recovery strategy and the strategy sets out activities that are likely to constitute “destruction” of this habitat.

Activities likely to result in the destruction of hibernacula identified as critical habitat include, but are not limited to, the following:
activities resulting in the introduction of WNS into hibernacula previously free of WNS, activities that result in collapsed walls or ceilings or flooding, or activities that result in the hibernaculum being inaccessible or unavailable to bats or alters the hibernaculum’s temperature, humidity, airflow, or other microclimatic characteristics outside of the range acceptable to the bat species for which critical habitat is identified.

There are no general prohibitions related to harming or killing bats (or birds for that matter) by virtue of the siting and operation of a wind turbine under provincial law. Nor are there laws related to the protection of bat habitat or displacement of bats due to the operation of a wind turbine.   (Note: Incidental take provisions of the Migratory Birds Convention Act may apply to birds but that is for another day).

Mitigation of bat related concerns may arise in relation to any environmental assessment that is conducted for a proposed project. This may result in legally enforceable provisions related to bat mortalities in specific facility authorizations.   Beyond this, the vast majority of legally enforceable provisions around bat mortalities related to wind turbines are dependent on the exercise of discretion by the department of Environment and Parks (AEP), the Alberta Utilities Commission (AUC), or both.

The central approach to managing impacts from wind development is through policy direction, guiding frameworks and directives. Most of these are aimed at site selection with monitoring and reporting of mortalities post-construction. There is also an approach to mitigation of impacts on bats set out in these policies. The relevant policies include: the Wildlife Energy Directive and the Bat Mitigation framework for Wind Power Development (Also see Robert Barclay and Erin Baerwald, Post-Construction wind energy protocol for bats (2015)).

These policies are primarily operationalized via the imposition of terms and conditions on facility authorizations. For grid-tied wind farms, this is typically achieved through conditions on approvals issued by the AUC. . For example, the Forty Mile Granlea Wind GP Inc./Suncor Forty Mile Wind Power Project (Approval 24907-D02-2019) includes the following provisions.

The approval further notes that “Suncor will abide by any requirements, recommendations and directions provided by AEP, whether in the context of a working group or otherwise, including any additional monitoring and mitigation that AEP considers necessary to address cumulative effects occurring from two or more projects within the local area, as defined by AEP.”

This in effect provides AEP sufficient discretion and power to direct mitigation efforts. Unfortunately, public reporting of mortalities does not appear to occur, nor are mitigation plans and mitigation directions. Evaluating this system therefore would require significant analysis of data and auditing of mortality reporting to determine the success of this approach.

So, are we winging it?

Alberta’s laws are primarily focused on protecting individual bats and minimizing disturbance of their dens, however two species of bats are largely unprotected. There is a need to ensure all bats are protected by intentional killing (unless licenced for specific purposes).  Regardless education and enforcement are essential.

The laws relating to bat mortality associated with wind power is less protective and more discretionary. While it appears government retains the ability to order mitigation measures post-construction (although a full review of approvals is required to confirm this), there is limited accountability embedded in the regulatory system to ensure effective mitigation occurs if mortality thresholds are exceeded.

Bats deserve our respect and diligence

Organizations such as the Alberta Community Bat Program are aimed at engaging citizens to learn about the importance of bats and to participate in bat-related citizen science. This is key (along with enforcement) to minimizing intentional killing this ecologically important and fascinating species.

Diligence in monitoring and tracking of bat mortalities to (hopefully) stay ahead of white nose syndrome is also essential. Further, increased transparency around wind turbine impacts on bats is needed to ensure we are taking effective steps to mitigate the impacts on bat populations.