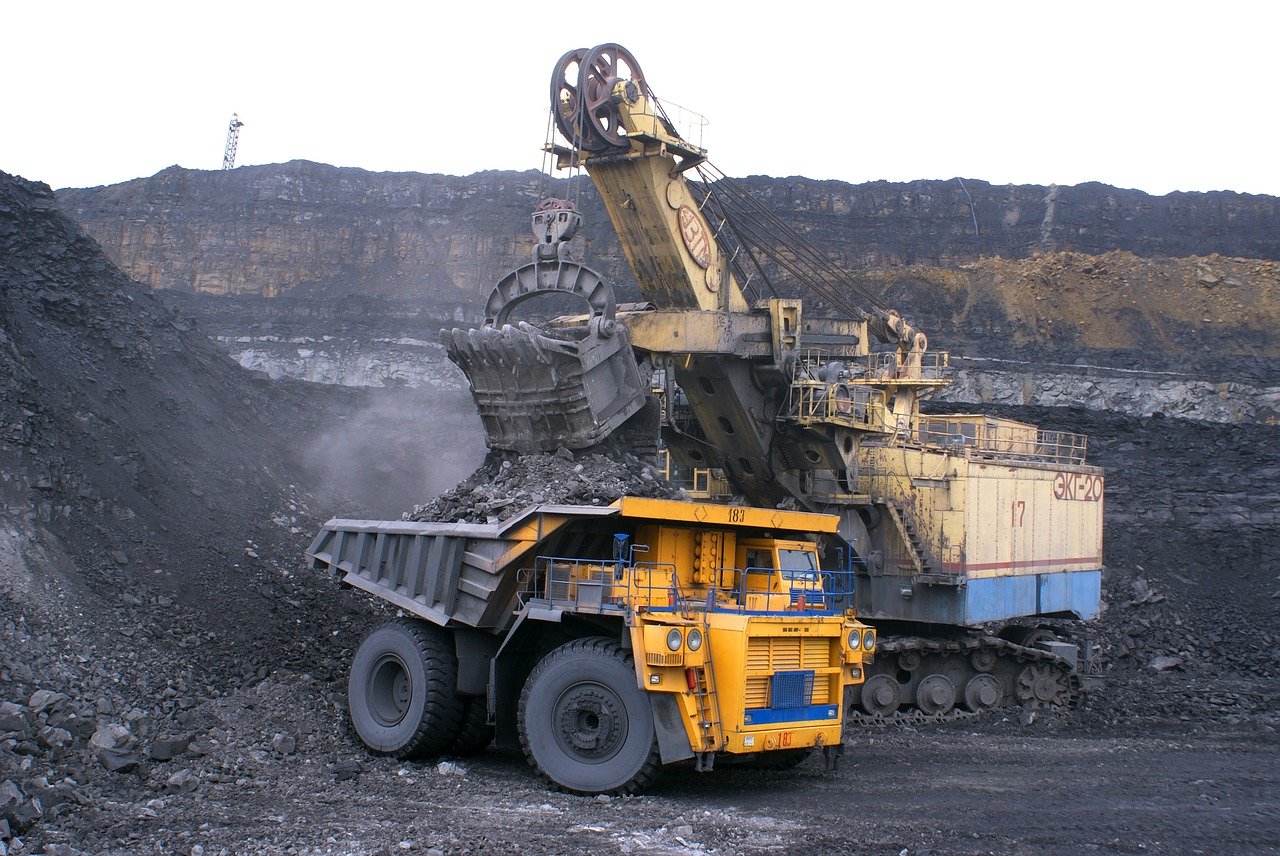 Last  week we celebrated Environment Week but the Government of Alberta had an odd way of celebrating to say the least. Effective June 1st, A Coal Development Policy for Alberta (Coal Policy) has been rescinded (see Information Letter 2020-23 and Coal Information Bulletin 2020-02).

The Coal Policy which dates from 1976 is ostensibly being rescinded as a modernization step. Many aspects of the Coal Policy – such as those dealing with royalties, labour requirements, and environmental protection – have been superseded or not enforced. The only mechanism still in place (prior to June 1st) was the four public land use categories for the purposes of coal exploration and development:

Limited exploration may be permitted under strict control but commercial development by surface mining will not normally be considered. This category includes lands in the Rocky Mountains and Foothills for which the preferred land or resource use remains to be determined, as well as, local areas of high environmental sensitivity.

Exploration is desirable and may be permitted under appropriate control and in which development by surface or underground mining or in-situ operations will be approved subject to proper assurances respecting environmental protection and reclamation of disturbed lands. This covers the Northern Forested Region and eastern portions of the Eastern Sloped Region, as well as, Class 1 and Class 2 agricultural lands in the settled regions.

Exploration may be permitted under appropriate control and in which surface or underground mining or in-situation operations may be considered subject to proper assurances respecting environmental protection and reclamation of disturbed lands. This covers the parts of the province not included in the other three categories.

With the rescission of the Coal Policy, the restrictions of coal exploration and development on category 2 and 3 public lands have been removed. The GOA has indicated that it will continue to prohibit coal activities on public lands formerly designated as category 1 (Information Letter 2020-23). The Information Letter states that this prohibition is “being continued to maintain watershed, biodiversity, recreation and tourism values along the Eastern Slopes of Alberta’s Rocky Mountains” (page 1).

However, looking back to the Coal Policy, it states that the lands within the Eastern Slopes regions includes large areas in category 1, areas in categories 2 and 3, and some areas in category 4 (Coal Policy, Appendix 2). This means that, with the rescission of the Coal Policy, there will be loss of protections in the mountains and foothills along  the eastern slopes of the Rockies. There is now a possibility for increased coal exploration and surface mining (i.e. open pit mines) in this region which was previously subject to an extra layer of scrutiny. 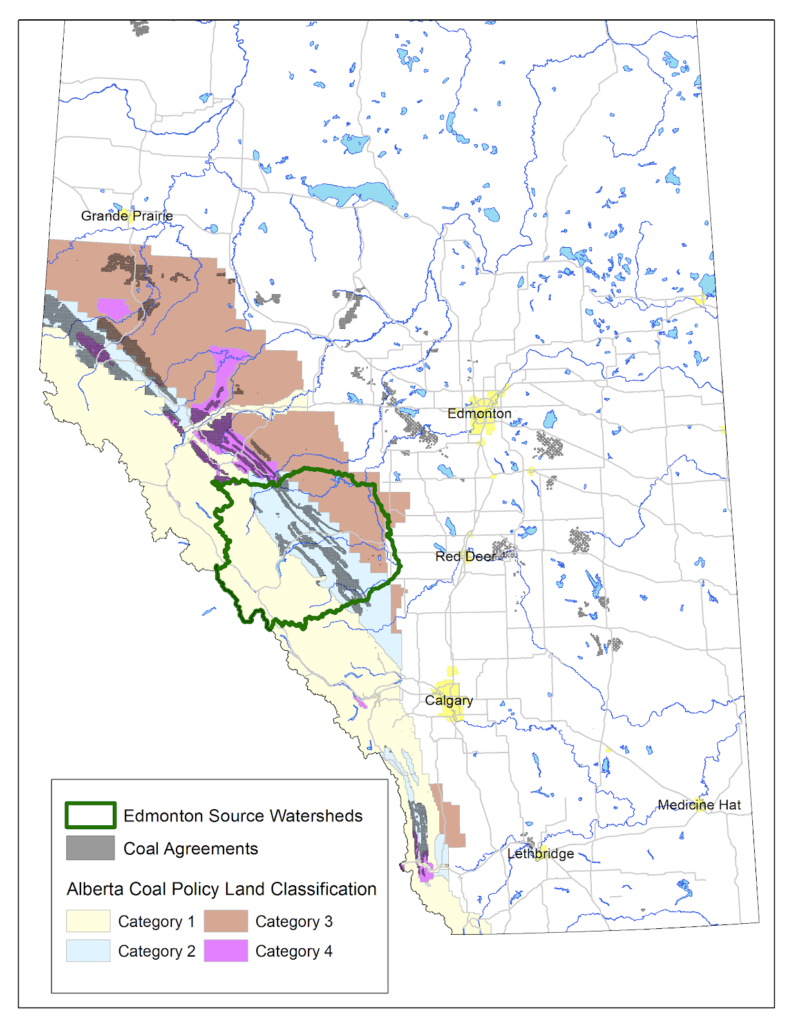 Map of the Eastern Slopes showing the four coal categories, with headwaters of the North Saskatchewan River outlined in dark green. Reproduced from Canadian Parks and Wilderness Society, Northern Alberta website at www.cpawsnab.org

The Eastern Slopes region has long been valued for its landscape and habitat values, and is critical to watershed health (see CBC Article, CPAWS Press Release, and AWA Press Release which includes maps with grizzly bear and caribou range overlays on the coal policy categories). Without the protections provided by the Coal Policy, these immense values are at greater risk of being lost.

According to a GOA statement, at the time the Coal Policy was made “land use planning hadn’t yet been completed, supporting infrastructure was lacking and there were environmental concerns that existing regulatory processes weren’t equipped to handle” (see GOA statement on rescission of the Coal Policy). This statement implies that Alberta’s land use planning is fully implemented. It’s not. It also implies that our regulatory processes are adept at addressing cumulative environmental impacts.  It’s not.

Alberta’s primary  legislative tool for land use planning is the Alberta Land Stewardship Act (ALSA). The ALSA enables the development of regional plans which are meant to address cumulative impacts within a region, and to direct planning and decision-making within a region. A regional plan may be augmented with subregional plans and environmental management frameworks. The province has been divided into seven regions for the purposes of regional planning under ALSA. Two of the seven plans are complete (Lower Athabasca and South Saskatchewan) with a third in development (North Saskatchewan). Even on this basis alone, it is apparent that land use planning in Alberta still has a way to go before it can be considered “completed”. Further, a comparison of the map shown here with the areas of the provinces which are subject to a completed regional plan illustrates that the majority of category 2 and 3 lands are not yet subject to regional land use planning. [See a map of the regional plans and status here]

Alberta does have extensive regulatory regimes governing the exploration and development of its natural resources. The exploration and development of Alberta’s coal resources is governed by the Coal Conservation Act which is administered by the Alberta Energy Regulator (AER). This Act and its regulations set the licensing scheme for coal resource activities. Further, such activities are subject to general environmental laws such as the Environmental Protection and Enhancement Act and the Water Act (including environmental assessment and reclamation requirements).

However, these regulatory requirements still proceed on a project by project basis and cannot offer an over-arching regional approach similar to that provided in the Coal Policy. Regulation on a project by project basis tends to be ineffective at addressing cumulative effects on a larger scale.  Biodiversity loss is a consequence of the failure to address cumulative effects. The public lands covered by categories 1, 2 and 3 in the Eastern Slopes are home to sensitive, at risk species such as grizzly bears and caribou (see AWA Press Release which includes maps with grizzly bear and caribou range overlays on the coal policy categories). By imposing development restrictions or requiring additional scrutiny,  the Coal Policy offered a layer of protection for at least some areas of the province which are environmentally significant and sensitive. That protection has now been removed.