Home » The ELC Blog » Let’s Show our Love for Wetlands 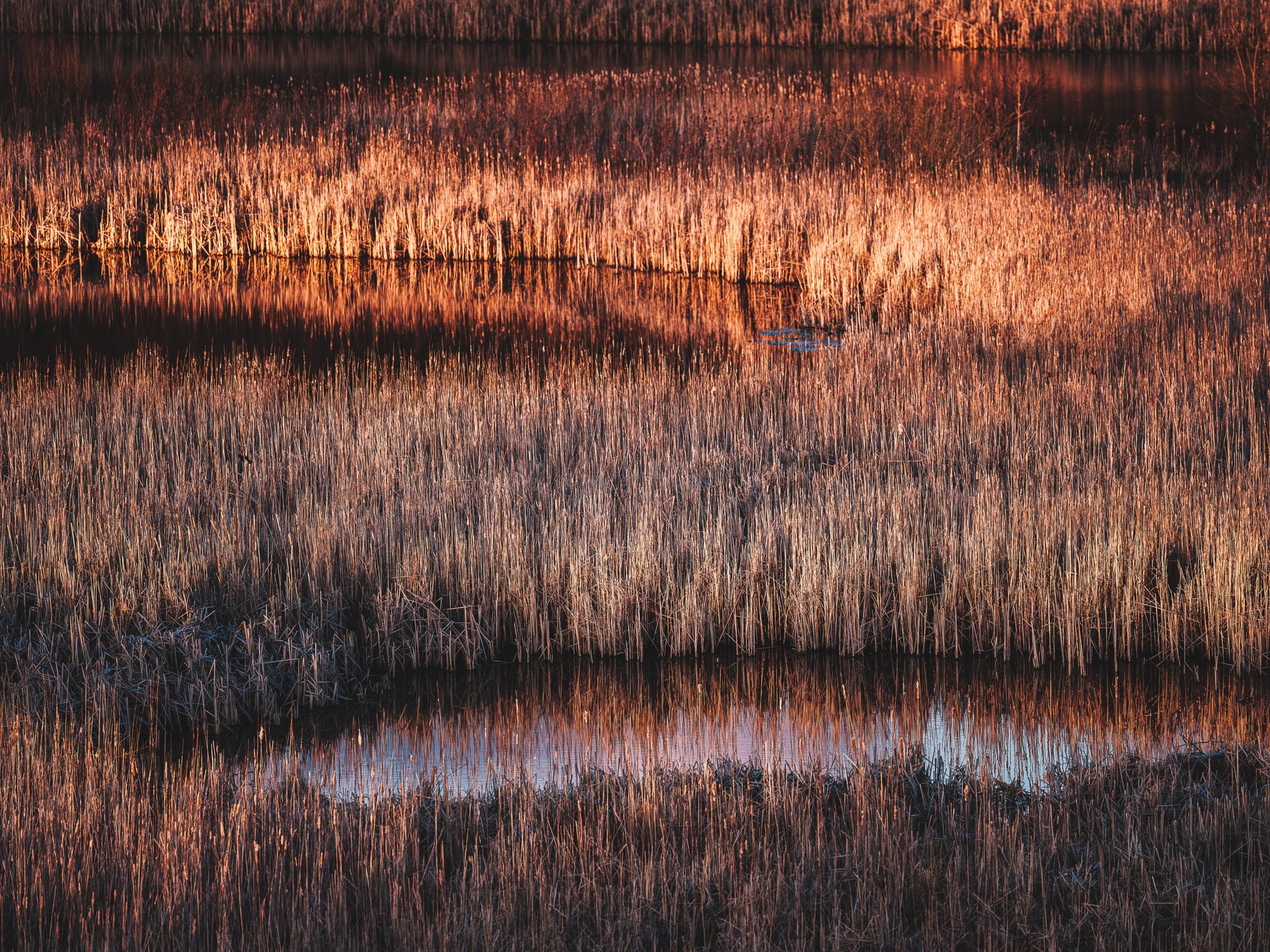 While February is best known for celebrating love on Valentines’ Day, it is also the month we express our love for wetlands with World Wetlands Day.

Currently, Canada has 37 sites which are designated as Wetlands of International Importance under the Ramsar Convention (also called Ramsar Sites). These sites include Beaverhill Lake, the Hay-Zama Lakes, the Peace-Athabasca Delta and the Whooping Crane Summer Range, all which are located in Alberta (the last extends into the NWT as well). Obviously, the Alberta Ramsar Sites are significant wetlands but represent only a small portion of the almost 21% of the province that is covered by wetlands (for more information, see the Wetlands Alberta website). The regulation of Alberta’s wetlands primarily falls under the jurisdiction of the province, as does regulation of Alberta’s water (although there is some relevant federal jurisdiction as the federal government regulates fish and fish habitat).

Why do we care about wetlands?

Alberta’s wetlands are critical for replenishing groundwater, absorbing floodwater, and naturally filtering surface water. Wetlands can play an important role in climate change mitigation (as carbon sinks).  As well, wetlands are absolutely key to conservation of biodiversity in Alberta. For more information on the benefits of wetlands, see the Wetlands Alberta website .

Despite their immense value, Alberta has lost a significant portion of wetlands in many regions of the province through both  permitted and unpermitted losses (see Shari Clare and Irena F. Creed “Tracking wetland loss to improve evidence-based wetland policy learning and decision making” (2014) Wetlands Ecol Manage 22: 235-245). (Note an earlier version of this blog cited a percentage of wetlands lost but the exact proportion of wetlands lost in different regions of the province is hard to discern, particularly in the green or forested region of the province.)

What laws do we have to protect wetlands?

As mentioned, Alberta’s water and wetlands are primarily regulated by the province via a variety of laws and policies. In a very general sense, Alberta’s Environmental Protection and Enhancement Act (EPEA) protects against water pollution whereas the Water Act regulates the consumption and diversion of water. The Water Act also regulates activities on land that might alter the flow of water, change the location of waters, cause situation of water, cause erosion of a water body’s bed or shore, or effect the aquatic environment.

In terms of wetlands conservation and protection, the Alberta Government has issued the Alberta Wetland Policy (which replaces the predecessor Wetland Management in the Settled Areas of Alberta: An Interim Policy). The stated goal of the Alberta Wetland Policy to “sustain the benefits [wetlands] provide to the environment, society and environment” is rather vague and difficult to measure. There is no express goal to maintain overall wetland area within the province (unlike the predecessor policy which effectively adopted a “no net loss” goal at least in the settled areas of Alberta). Although, it seems that the predecessor policy did not achieve the goal of no net loss as noted in Jacqueline N. Serran, Irena F. Creed, Ali A. Ameli and David A. Aldred “Estimating rates of wetland loss using power-law functions” (2018) Wetlands 38:109-120). The predecessor policy was in place from 1993 until 2015 (the new policy took effect in the white (settled) area of the province in 2014 and in the green area in 2016).

Further, the current policy does not say what benefits will be sustained nor how we can measure whether they are sustained. Rather, the policy adopts a wetland mitigation hierarchy which promotes an approach of avoidance first, followed by minimization of impacts, and replacement as a last option. The policy sets replacement ratios based on the quality of the wetland being lost (that is, a higher quality wetland requires an larger replacement amount than a lesser quality wetland). The quality of a wetland is assessed using five criteria: biodiversity, water quality improvement, flood reduction, human value, and abundance. The policy does not address wetland impacts caused by activities approved prior to its adoption.

The effectiveness of the Wetland Policy to protect and conserve Alberta’s wetlands is questionable in light of its failure to adopt a no-net loss approach and its discretionary nature. For more discussion on this, see our previous blog post here and Professor Arlene Kwasniak’s post here.

A Key to Wetland Protection: Stewardship on Agricultural Lands 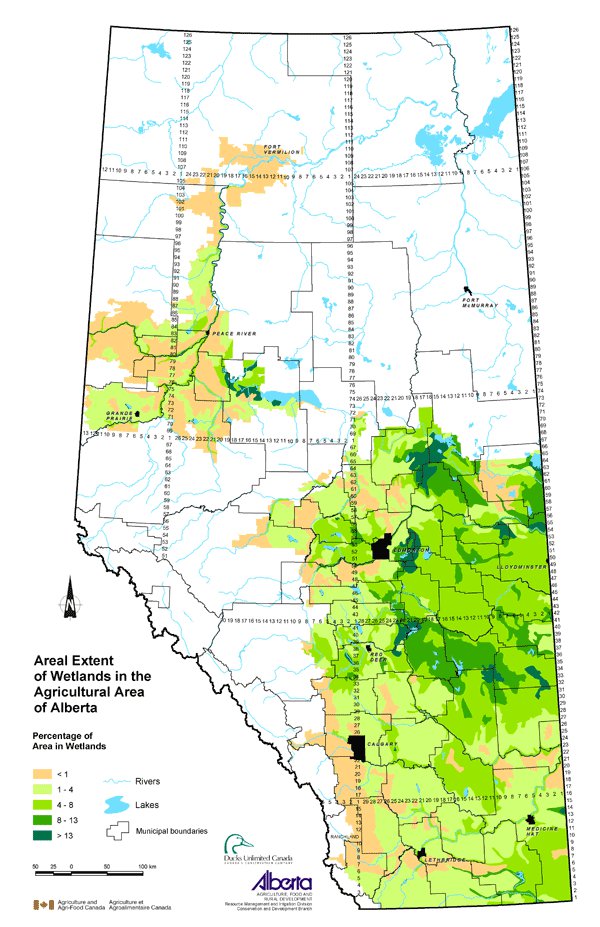 Wetland loss is driven by a myriad of factors including urbanization, resource activities (forestry, mining, and oil and gas), and climate change. Agriculture also plays a significant role in wetland loss. David Locky has observed that, at a national level,“[a]griculture has caused more losses to wetlands than any other activity”.  Losses through time are not surprising as the settlement of the west was based on agriculture.

Aside from direct loss of wetlands due to agricultural activities, Alberta’s wetlands are negatively affected by eutrophication from fertilizer and pollution from agricultural herbicides and pesticides (Locky at 33). This makes management and conservation of wetlands on agricultural lands particularly vital.

The challenges facing the agricultural sector in preserving wetlands can be overwhelming and can be quite variable. As land managers, farmers have not been historically linked to the regulatory world of wetlands, notwithstanding that many of Alberta’s laws related to wetlands have been substantively the same for decades.

Cortus et al. note that “[d]raining wetlands for agricultural uses is attractive to farm operators for several reasons”, including allowing for expansion of the cultivated land base and improving efficiency of operations (e.g. by not having to operate machinery around wetlands). On the other hand, as set out in Wetlands on My Lands: A Landowner Guide for Restoring and Maintaining Wetlands in Alberta, wetlands can be very beneficial to an agricultural operator. Benefits include reducing impacts of drought and floods, increasing quality and quantity of water resources (surface and ground), increasing forage, reducing soil erosion and watershed sedimentation, and reducing greenhouse gases.

So how do we encourage agricultural operators to maintain and restore wetlands on their lands?

The beds and shores of a naturally occurring permanent wetland are owned by the Crown, as is the water within the wetland (guidance for determining permanence of a wetland is found in the Guide for Assessing Permanence of Wetland Basins). The Water Act defines the term water body to include wetlands (whether or not the flow or the presence of water is continuous, intermittent or occurs only during a flood). This means that draining, filling or otherwise altering a wetland is prohibited without obtaining prior approval pursuant to the Water Act. As such, there is a chance that this permission could be outright denied, or that mitigation or replacement/compensation will be required. In practice, it may be difficult for an agricultural operator to demonstrate that loss of the wetland cannot be avoided (even if it may be beneficial operationally).

However, requiring approvals to drain or fill wetlands does not encourage or incentivize good management practices. Nor does it encourage restoration of lost wetlands to which the Wetlands Policy does not apply (the Water Policy replacement requirements do not apply to ephemeral wetlands as per the Alberta Wetland Identification and Delineation Directive or to wetlands affected by grandfathered activities). The issue of restoration itself is contentious since some of the historic losses occurred without authorization.

Cortus et al. suggest that policy instruments could be used to discourage incremental wetland drainage. For instance, future agricultural “support or risk programs may need to be explicitly tied to conservation or wetland preservation programs”. The wetland policy also provides a disincentive for pursuing wetland draining by requiring restoration or the payment of in lieu fees.

There are a variety of other tools that can be explored such as providing tax benefits for conserving wetlands (for example, the federal ego-gift program which grants tax credits for placing conservation easements on ecologically sensitive land) or direct support for providing ecological goods and services (for example, the species at risk partnerships on agricultural lands program (SARPAL).

Under the Wetlands Policy, a wetland that is destroyed by development must be replaced (although it should be noted that this requirement does not apply to ephemeral wetlands and that a payment can be made in lieu of replacement). Outside of the operation of this policy which provides an avenue to maintain some wetlands within the province, additional restoration of wetlands (i.e. recovering some of the lost wetlands) could be encouraged via market-based instruments under the Alberta Land Stewardship Act (ALSA). Tools such as stewardship units and tradable development credits could be used as a tool to place a financial value on ecological goods and services which can be realized by the agricultural operator upon conservation or restoration. It is important to note that although these tools are enabled by ALSA, they are not well developed or established in practice. Furthermore, these tools can raise of a variety of issues such as additionality (i.e. the value being credited must be for something which otherwise would not exist), stacking (i.e. recognizing the multiple values that can exist within one unit of land); and leakage (i.e. harm being transferred from one area to another). For a review of the use of “conservation offsets” in the context of wetlands, see Dave Poulton’s blog post here.

These are just some approaches that could be used to encourage agricultural operators to maintain and restore wetlands on their lands. Given the complex legal and economic matrix in which agricultural operations exist, there will not be one “silver bullet” that addresses loss of wetlands on agricultural lands. Rather, a mix of regulatory requirements and policy-driven incentives will be required. Finding the right mix will require consideration of difficult questions with practical implications: Should nature be commoditized? Who should bear the costs of conservation or conversion (in other words, should we pay to conserve or pay to convert)? Should a “wetlands bank” be established to facilitate the use of offsets or other market-based conservation tools?   Regardless of the mix of regulatory requirements and policy-driven incentives adopted, a key component will be ensuring that wetlands are monitored to ensure both regulatory standards and offsets established through incentive programs are met.

Keep an eye out for the ELC’s current projects which will provide a more comprehensive look at aspects of land conservation (not just wetlands):

Moving from Conversion to Conservation of Agricultural Lands: Challenges and Recommendations

and Regulatory Approaches to Funding Conservation

The ELC would like to thank the Alberta Law Foundation for its support of the ELC’s Regulatory Approaches to Funding Conservation program.

The Moving from Conversion to Conservation of Agricultural Lands project is made possible through a grant from the Alberta Real Estate Foundation and an anonymous foundation.